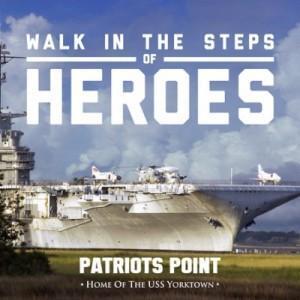 Patriots Point Naval & Maritime Museum will honor those who gave their lives serving in the United States military during a ceremony on Memorial Day, May 30th.

The remembrance event is free to attend in the Vietnam Experience exhibit starting at 11:30 am. The ceremony will include a presentation of colors and Pledge of Allegiance by Lucy Beckham High School JROTC cadets and Reverend Iris J. Brown will sing a patriotic medley. A local musician will perform Taps on a bagpipe. The featured speaker will be Tara McClary Reeves, daughter of Vietnam War veteran and Purple Heart recipient Clebe McClary.

Patriots Point will continue its tradition of participating in Taps Across America. This event, launched by CBS Evening News correspondent Steve Hartman, encourages musicians across the country to participate in a nationwide performance of “Taps” in recognition of fallen service members. At 3 pm on Memorial Day, a group of 10 musicians from Hanahan Middle School and Hanahan High School will join in and play Taps on the flight deck of the USS Yorktown.

“It is important that we take the time to remember those who died protecting our freedoms,” said Executive Director Dr. Rorie Cartier. “We are proud to include so many community members in our Memorial Day ceremony. We hope those who attend will spend time exploring our museum exhibits to learn stories of those who paid the ultimate sacrifice during World War II and the Korean and Vietnam Wars.”

In addition to the ceremony, the museum will show the Oscar-winning documentary “The Fighting Lady” in the Smokey Stover Theater aboard the USS Yorktown from Saturday, May 28th through Monday, May 30th. The film showcases the heroism of the Yorktown crew during World War II.

The remembrance ceremony in the Vietnam Experience exhibit is free and open to the public. Free parking will be available from 11 am to 11:30 am. Any visitors who wish to tour the museum, hear Taps Across America on the flight deck, or watch “The Fighting Lady” in the ship’s theater, must purchase a general admission ticket.

You can learn more at https://www.patriotspoint.org.