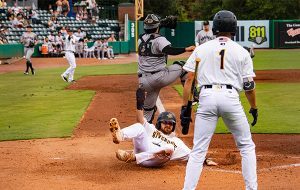 The Charleston RiverDogs were dominant in every facet of the game on the way to a 22-0 beatdown of the Augusta GreenJackets on Saturday night at Joseph P. Riley, Jr. Park.  Offensively, the 22 runs were the most scored by the RiverDogs in a single game this century.  On the mound, the pitching staff limited Augusta to just one hit and recorded their tenth shutout of the season, tied for the most in Minor League Baseball.  The contest was played in front of 4,007 fans.

Retired in order in the first inning by Tanner Gordon, the RiverDogs (45-18) scored at least one run in six of their final seven innings at the plate to blow the game open in the early going.  Diego Infante opened the scoring by leading off the second inning with his sixth home run of the season. In the third, the floodgates opened.  Charleston sent 14 batters to the plate and scored a season-high nine runs in the frame.  Infante registered a three-run triple during the rally and Nick Schnell blasted a three-run home run to further extend the lead to 10-0.

The RiverDogs were just getting started.  In the fourth inning, a double-play groundout by Michael Berglund allowed a run to score to stretch the gap to 11-0.  A throwing error from Augusta third baseman Cade Bunnell allowed two more runs to cross the plate in the fifth and a wild pitch with a runner on third base, followed by two RBI groundouts, made the score 16-0 after six.

The score remained the same entering the bottom of the eighth inning.  In that frame, the RiverDogs sent 11 more batters to the plate, scoring six runs on four hits to grow the margin to 22.  Brett Wisely chipped in an RBI double, Jonathan Embry worked a bases loaded walk and Heriberto Hernandez added an RBI single early in the frame.  Later, Berglund lined a three-run double off the top of the right field wall to score the final three runs of the night.

While the offense was doing all of this, the pitching staff was keeping the GreenJackets (28-36) from building any momentum.  Starter Taj Bradley worked 5.0 innings with five strikeouts to lower his ERA this season to 2.14.  He also moved into a tie for the league lead by earning his eighth win.  Joe LaSorsa made his RiverDogs debut by working 2.0 perfect innings and striking out three.  Steffon Moore and Neraldo Catalina each turned in one inning to close out the game.

Augusta’s only hit was a second inning single through the side from Ricardo Rodriguez.  Meanwhile, the RiverDogs received at least one hit and run scored from every player in the lineup.  Infante finished 2-5 with a triple, home run and five runs batted in to lead the way. Wisely, Hernandez, Schnell and Berglund all collected three runs batted in.

Ballpark Fun
On Anime Night at The Joe, fans were treated to clips on the video board from popular anime shows, soundtracks from those shows playing throughout the ballpark pre-game and special anime-themed headshots for each player.  In addition, the team had a Japanese public address announcer help introduce batters throughout the game.

The RiverDogs will aim for a series sweep in the finale on Sunday evening at 5:05 p.m. LHP Ian Seymour (0-0, 1.69) will start for the RiverDogs and RHP Jared Johnson (0-4, 8.10) will work for the GreenJackets in a rematch from Tuesday’s series-opener.