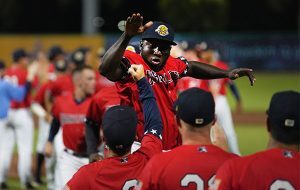 Following two nights of high-scoring baseball, the Charleston RiverDogs and Augusta GreenJackets engaged in an old-fashioned pitcher’s duel on Friday night at Joseph P. Riley, Jr. Park.  In the end, the RiverDogs used a great night from their bullpen to collect a 3-1 win that secured another night as the team holding the best record in Minor League Baseball.  The RiverDogs have won five straight games.  The contest was played in front of 5,707 fans, the largest crowd of the season at The Joe.

Augusta (28-25) scored the first run of the game for the third straight night.  Jose Bermudez opened the third inning with a bunt back to the mound, but Seth Johnson’s throw bounced wide of first and allowed Bermudez to reach scoring position on a two-base error.  A wild pitch moved the runner to third and he was joined on base by Cade Bunnell after a walk.  With runners on the corners, Vaughn Grissom rolled into a 6-4-3 double play as the first run crossed the plate.

The RiverDogs (44-18) were held without a hit by GreenJackets starting pitcher Roddery Munoz over his 3.2 innings of work.  When the right-hander departed, Charleston went to work against the bullpen.  In the fifth, Garrett Hiott opened the inning with a walk, stole second and moved to third on a fly ball to deep center from Johan Lopez.  With the infield drawn in, Abiezel Ramirez chopped a ball to second, but two infielders collided and Hiott scored to tie the game.

The tie was broken in the the very next frame when Brett Wisely doubled to left, stole third and scored on Heriberto Hernandez’s sacrifice fly to center to give the RiverDogs a 2-1 lead.  The final run scored in the seventh when Osleives Basabe rolled a single through the right side to plate Lopez.

From that point forward, the RiverDogs bullpen made sure Augusta wouldn’t threaten again.  Left-hander Trey Cumbie earned the win by dealing 3.0 scoreless innings with five strikeouts.  He allowed only one hit.  Angle Felipe made quick work of the GreenJackets in the ninth to secure his sixth save in as many opportunities.  Johnson, the starter, took a no-decision after allowing just one unearned run in 5.0 innings.  He collected six strikeouts.

Wisely was the only player in the game with multiple hits, going 2-4 with a double and a run scored.  Augusta was limited to just four hits on the night.

Ballpark Fun
The season-high 5,707 fans that packed The Joe brought a great deal of energy to the stadium all night.  From big moments in the game to between-inning promotions and even the post-game fireworks show, they made sure their presence was felt. The fireworks show, set to the tune of famous “boy band” songs capped off the evening with many in attendance singing along.

Having secured a series win, the RiverDogs turn their attention to game five of the set on Saturday night at 6:05 p.m.  RHP Taj Bradley (7-3, 2.36) will take the ball for the RiverDogs in a showdown with Augusta RHP Tanner Gordon (3-2, 1.95).  The team will celebrate the iconic Japanese form of animation on Anime Night.  A limited amount of fans will receive RiverDogs anime posters at the gate.