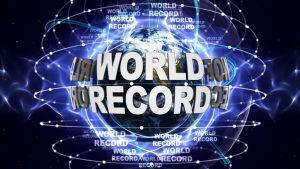 We’ve all heard of Bingo, and we’re almost certain that most people have played it too. But what do you do if you feel as if you’ve exhausted all of your playing options? Well, for a lot of people, the answer comes in the form of making some kind of name for themselves within the gaming community. Whilst your first thought might be to reign supreme as one of Bingo’s biggest winners, the (sometimes) easier option can be to try your hand at a world record involving the game.

To give you a bit of inspiration before you make your own attempt at a record-breaking feat, we’ve pulled together some of the best gaming accomplishments, centred around Bingo, the exciting game that we know and love.

The Man, the Myth, the Legend: Doug McManaman

Canadian born, Doug McManaman holds not one, but two world records related to Bingo. The first came in 2011 when he chose to demonstrate his enthusiasm for the game by balancing a basket of Bingo balls on a pole for a staggering one minute and 19.4 seconds. Not only that, McManaman went one better than just balancing the pole with his hand – he actually used his chin to stabilise the construction, displaying his new-found talent on his front porch for his neighbours’ enjoyment.

A couple of years later and McManaman was at it again. He decided that one record wasn’t enough and he wanted to step into the spotlight once again to display his intense love for all things Bingo. This time, the accomplished chap wanted to attempt to build the tallest tower made out of Bingo markers. Instead of the felt tip variety that we use today, these markers were small, round plastic discs that players used to use to cover numbers on their tickets. McManaman’s impressive tower consisted of 82 of these markers, erected in just 10 seconds.

Neither of McManaman’s hopeful records have been recognised by the Guinness Book of World Records, allegedly because of their niche nature. Well Doug, you’re still a hero in our eyes!

The Largest Game of Brick-and-Mortar Bingo

In 2006, Colombian players claimed this record and definitely exceeded the usual maximum of 50 people per game that we usually see. Instead, this Bingo session saw a whopping 70,080 people purchasing tickets and dabbing away in the hopes of getting a win. What’s more, due to the massive number of players getting stuck into the game, the progressive jackpot went on to reach an all-time high of over £250,000.

The Largest Bingo Balls used in a Game

In 2014, the hopeful people of Manchester came together on the cobbled streets that make up the iconic Coronation Street backdrop to attempt a world record. Bingo balls measuring 60.1cm were thrown from the top windows of the homes of Corrie regulars as each number was called out. This absurd game was played in order to raise money for charity and finished with a pot of over £10,000! With that, a record was broken, along with a couple of windows, we’re sure!

The Guide To Never Miss A Live NBA Match Again