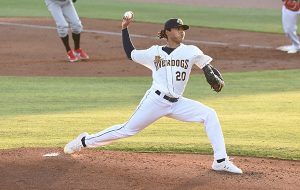 Charleston RiverDogs starting pitcher Taj Bradley has been named the Low-A East Pitcher of the Month for June, Minor League Baseball announced on Friday afternoon. John Doxakis received the same honor for the month of May as the RiverDogs have swept the circuit’s Pitcher of the Month awards to this point in the 2021 season.

Bradley went 3-1 with a 0.90 ERA in four starts during the month, allowing two earned runs on 10 hits in 20.0 innings. He struck out 27 and walked four as opponents batted just .156 against him. Bradley currently ranks third in the league with 55 strikeouts this season.  He has recorded 10 strikeouts, a RiverDogs single-game season high, on two different occasions. For the season, he is 5-3 with a 2.50 earned run average.

“This is a very well-deserved honor for Taj”, said RiverDogs manager Blake Butera. “He has grown a lot this year both mentally and physically.  This is only the beginning of what will be a really nice career.”

The Tampa Bay Rays selected Bradley in the fifth round of the 2018 draft out of Redan High School in Stone Mountain, GA. He was ranked by MLB Pipeline as the No. 21 prospect in the Rays farm system entering the season. During the 2019 campaign, the right-hander went 2-5 with a 3.18 ERA in 12 appearances at rookie-level Princeton.  He struck out 57 batters in 51.0 innings.

Bradley and the RiverDogs will continue a series in Kannapolis tonight at 7:00 p.m. as they aim for a seventh consecutive win. The broadcast of all 120 RiverDogs games is available online at riverdogs.com.

Battery Fall 0-1 to Rowdies after Battle in St. Petersburg