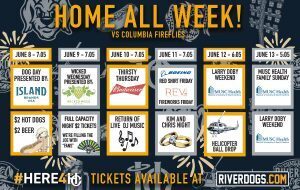 The Charleston RiverDogs return home for the first time this month to host the Columbia Fireflies from June 8th to 13th with no restrictions on capacity. The team has stuffed the six-game set with more promotions and theme nights than any other homestand so far this season.

For the first time since the end of the 2019 campaign, the RiverDogs plan to fill every seat with a fan.  Whether those fans make noise and add to the atmosphere or just help keep the others in attendance cool is another question entirely. There will be Great Danes, an infamous anniversary celebration and a tribute to the Negro Leagues. Here are all the details regarding what’s on tap:

Tuesday, June 8th, 7:05 pm: Dog Day: Four-legged friends are welcome every Tuesday so don’t leave them at home! Bring the pup along to the ballpark for each and every Island Coastal Lager Dog Day, when we encourage you to #TakeItEasy. For the first time this season, fans can enjoy $2 hot dogs and $2 beers on a Tuesday night. This week’s (large) spotlight will shine on Great Danes. Tuesday games are presented by 96.9 the Wolf.

Wednesday, June 9th, 7:05 pm: Pack the Park with Fans/Wicked Wednesday: Happy Hump Day!  For this game only, all field view, upper reserved, grandstand and general admission tickets will be just $2 when using the code “WELCOME” or visiting this page.  Hand fans, box fans, ceiling fans…we’ll celebrate all of them this evening. For the first time since September of 2019, there will be fans in every seat at The Joe. It will be a “fan appreciation” night of sorts with a special fan cam and one lucky fan selected as the “SuperFan of the Game”.  We should move on from this idea before we become long-winded. As is the case for every Wednesday at the ballpark, we will celebrate craft beer and throw in some wicked good fun thanks to Wicked Weed.

Thursday, June 10th, 7:05 pm: Thirsty Thursday: Where else would you rather be on a Thursday night? $1 beers are available throughout The Joe on each Budweiser Thirsty Thursday this season! That’s right, you can grab a $1 beer (or two) no matter where you are in the ballpark. This Thursday will mark the return of live music to The Joe as well! Thursday games are presented by 95SX.

Friday, June 11th, 7:05 pm: Kim and Chris Anniversary Celebration/Fireworks/Red Shirt Friday:  This year is the ten year anniversary of a famously short-lived, made-for-television wedding. On this night, we will celebrate our own Kim and Chris whose wedded bliss has withstood the test of time. We’ll also tip our caps to various things that have lasted longer than 72 days. As always, the RiverDogs and Boeing invite you to wear red in support of those who serve our country.  The team will take part on the field, wearing special red jerseys. MUSC Health will be administering vaccines at the ballpark before the game. The night will be capped with another fireworks spectacular presented by REV Federal Credit Union  Friday games are presented by 103.5 WEZL.

Saturday, June 12th, 6:05 pm: Larry Doby Weekend/Helicopter Ball Drop: The RiverDogs and their opponent, the Columbia Fireflies, will wear Negro League jerseys on this weekend as the organization holds its annual celebration of Larry Doby presented by MUSC Health. Doby was the first African-American player to play in the American League. As part of the celebration, the RiverDogs will pay tribute to the Cannon Street All-Stars, the Charleston-based team that became the first African American Little League sanctioned in South Carolina.  In addition, the team will honor the 2021 recipient of the Gus Holt Memorial scholarship.  Following the game, a helicopter will drop thousands of numbered bouncy balls onto the field.  If a ball lands on the target at home plate, the fan with the corresponding number will walk away with $1,000.  If no ball lands on the target, the nearest ball will be worth $500. Saturdays are presented by ABCNews4 and MyTV Charleston.

Sunday, June 13th, 5:05 pm: Larry Doby Weekend/Family Sunday: Prior to the RiverDogs game on this evening, the team will host a charity softball game featuring prominent members of the local black community.  Gates will open at 2:00 p.m. for the appetizer and fans must have a RiverDogs ticket for Sunday’s game to enter. The RiverDogs will take the field in Newark Eagles uniforms as they battle Columbia, dressed as the Homestead Grays, while the organization holds its annual celebration of Larry Doby presented by MUSC Health. Doby was the first African-American player to play in the American League. It’s a day sure to be filled with fun for the whole family! We’ll have fun activities for children throughout the game, both on the field and the video board. Sundays are presented by Charleston Radio Group.

RiverDogs Even Series with 8-3 Triumph over GreenJackets