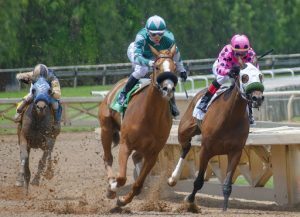 South Carolina may not be the epicentre of US horse racing but equestrian sports are still popular throughout much of the state. From Charleston to Aiken and Camden to Eloree, flat horse racing events and steeplechase races run throughout the spring and fall months.

In fact, Aiken is known to be “the heart of the state’s Thoroughbred Country” with a couple of major events like the Aiken Triple Crown taking place in the town over three consecutive March weekends.

One of the most unique features of South Carolina’s horse racing scene is the lack of wagering that takes place.

Unlike other US states and countries like Australia, where residents of Victoria get the day off work for the Melbourne Cup and where annual Melbourne Cup betting revenue exceeds over 500 million USD in just four days, SC residents enjoy horse racing events as more casual family affairs.

With this in mind, we’ll look at the top 7 events on the South Carolina horse racing calendar for anybody who wants to enjoy a day out at the races.

The Aiken Trials is the first event of the Aiken Triple Crown which also includes the Aiken Spring Steeplechase and Pacers & Polo (which replaced harness racing in 2004).

The Aiken Trials are flat horse races that are held every March at the Aiken Training Track.

Trials include 2, 3 and 2 years old & up races and for many horses it’s the first opportunity they get to race in front of a crowd.

In its long history, The Aiken Trials has also seen star thoroughbreds like Summer Squall, who lost in the Aiken Trials but went on to win the 1990 Preakness Stakes.

The Aiken Training Track is one of the USA’s best facilitates for local racehorses in the area and in 2019, horses who trained at Aiken won over $6 million at races around the country where betting and wagering is legal.

The second event in the Aiken Triple Crown, the Aiken Spring Steeplechase (yes there is also a Fall Steeplechase), is one of the biggest South Carolina horse races of the year featuring 6 jump races.

Like the other events in the Aiken Triple Crown, the Aiken Spring Steeplechase is as much about racing as it is about tailgating and partying.

The Aiken Spring Steeplechase began in 1930 with one of the founders being Thomas Hitchock (one of the most prominent figures in American steeplechasing) and usually attracts crowds of 30,000+ making it Aiken’s biggest sports event and largest outdoor party.

Sanctioned by the National Steeplechase Association, Camden’s Carolina Cup holds the record for the biggest attendance of any Steeplechase event in the country at 71,000, despite the lack of betting that occurs at the event.

Instead of going to sports wagering companies, much of the proceeds of the Carolina Cup go to supporting the Kershaw County Medical Center.

There are six races on Carolina Cup day and the event occurs late in the Spring at Springdale Race Course.

The biggest event of the year for the small town of Elloree, the Elloree Trials is a smaller affair in the thoroughbred and quarter horse racing calendar but it still brings in thousands of community members and out-of-staters.

The event is held at the Elloree Training Center in March and in addition to the racing, spectators also have the opportunity to watch (or enter) the Miss Elloree Trials beauty contest.

The Holy City’s biggest racing event features flat races and steeplechase events with some of the country’s top racing horses attending every year.

The Steeplechase of Charleston is held every November at the Plantation at Stono Ferry on the Stono Ferry Racetrack.

It’s not just horse racing but celebrities are often sighted (and perform) at the Steeplechase of Charleston and there are plenty of opportunities for fun with tailgating, the Vendor Village, and opening ceremonies all part of the festivities.

The King’s Tree Trials feature some of the southeast’s best thoroughbred and quarter horses in a nine-race event that occurs on the first Saturday of November.

The event is sponsored by the Williamsburg HomeTown Chamber along with the McCutchen Training center where the races are held.

As well as the usual festivities, the track is located on an idyllic farm setting in Williamsburg County east of Kingstree in Cedar Swamp.

Camden’s fall version of the Carolina Cup, the Colonial Cup is held every year in the fall and concludes the year’s racing season.

The race began in 1970 and usually gets over 10,000 spectators who also turn out to watch the Jack Russel Terrier Trials in what is arguably a more family-friendly affair.

Why Tech Companies Flourish in Charleston

The causes of slow heating of your hot water tank