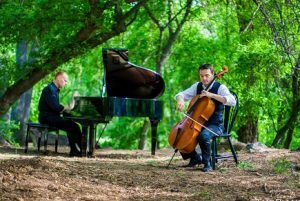 Since their serendipitous start in a Southern Utah piano shop, The Piano Guys have proven to be a powerhouse group without limits. Arriving as a musical phenomenon seemingly overnight, the quartet of Jon Schmidt (pianist, songwriter), Steven Sharp Nelson (cellist, songwriter), Paul Anderson (producer, videographer), and Al van der Beek (music producer, songwriter) have delivered bold compositions that transcend boundaries of style and genre, a boundlessness that has since translated into a massively-successful career.

Their 2020 album release 10 was a celebration of The Piano Guys’ 10-year anniversary. The album included their most popular hits from the past 10 years as well as brand-new arrangements. Steven and Jon are gearing up to hit the road to perform their new music and share their great humor. The Piano Guys perform at the Charleston Gaillard Center for one night only on April 25, 2022.

Tickets on sale Friday, June 4 at 10 AM EST at gaillardcenter.org. Tickets start at $58 (plus applicable fees). Gaillard Center Members receive presale access. Become a member today by contacting the Development Office at development@gaillardcenter.org or (843) 579-6468.

“Who would have ever thought four middle-aged dads from Utah filming classically influenced music in nature could ever succeed at the outset?” asks member Steven Sharp Nelson. “Our favorite thing is to find a way to be on the fringes of possibility. We like to combine things you would never expect to find together—but are close enough to make sense. It has been our mindset from the beginning.”

Since formally introducing themselves in 2011, The Piano Guys have released five studio albums, two Christmas releases and a fan-favorite live album, earning six No. 1 debuts on Billboard’s Top Classical Albums chart and garnering an impressive 2 billion-plus global streams, over 1.6 billion YouTube views, and averaging nearly 2 million monthly listeners on Spotify alone. They have sold out concerts in almost every corner of the world and attracted a diehard audience of millions. The Piano Guys have appeared in The New York Times, Fast Company, BuzzFeed, Mashable, People, been featured on CBS Sunday Morning and performed on the TODAY Show, Good Morning America and The Tonight Show.

Follow us
Related Topics:Gaillard CenterThe Piano Guys
Up Next