While many low country residents who live and work west of the Ashley, especially those near Glenn McConnell Parkway and Bees Ferry Road corridor, may be familiar with Stones Throw Tavern, the old school neighborhood food and drink establishment recently opened up in Northwoods Mall, in the former location of King Street Grill. With the growth taking place in Hanahan, Goose Creek, and alongside I-26, the owners envisioned the mall, which is in the center of the north area of North Charleston, would be an ideal spot for a second location.

Aside from a few entrees, the new tavern resembles the menu items found at their original location in West Ashley at 3417 Shelby Ray Ct., just off McConnell. Stones Throw is a good mix of pub fare (burgers & sandwiches), as well as American and southern favorites.

A half dozen burgers are on the line-up at Stones Throw. They all begin with a half pound 100% chargrilled all beef patty, with the standard cheeseburger (your choice of cheese), served with seasoned fries, and a kosher dill pickle spear for just $10.

For a dollar or two more you can enjoy a Breakfast Burger topped with egg, or the Tex-Mex complete with onion strips, jalapenos, cheese, slathered in BBQ sauce on a potato bun. Change it up a bit and try the Patty Melt, oozing with Swiss cheese, and sauteed onions on fresh rye bread. All the burgers have that ‘ideal with a cold brew’ pub taste.

Not in the mood for a burger, than the Monte Cristo is a sweet & sour sandwich treat. An ample amount of sliced ham and turkey, under layers of Swiss and American cheeses, before being batter dipped and fried. Sprinkled with powdered sugar and served with raspberry preserve. A nice variation from the norm.

Stones Throw offers up six oversized salads that more than satisfy. The standards include a house, Caesar, and Chef Salad. But if you require a little zest with your greens, than the Baja Grilled Chicken garnished with black beans, corn relish, pico, tortilla chips, and spicy ranch will tantalize the taste buds, as will Fajita Salad, overflowing with avocado, sour cream, black beans, and your choice of steak or chicken strips.

Maybe you’re coming in mid afternoon or late night with a couple of friends to watch a game, and just want to share some appetizers with your cold beer. The Cra-Cra (breaded) Shrimp with spicy ranch dipping sauce go great with a glass of wine, as does the three oversized Pretzel Stix and beer sauce with a brew. Want to play it safe, try the Loaded Fries (smothered in cheese & bacon), or the always easy to eat Chicken Fingers.

Of course tavern food goes well with adult beverages, and at Stones Throw they have a plethora of drink choices to whet your whistle. While many Charleston area establishments have expanded their brew selections, that is not the norm in the north area. However Stones Throw is changing that up, offering 28 select beers on tap, alongside a strong wine menu, and your favorite cocktails.

Whether you’re craving a stout, a lager, or an IPA, Stones Throw Tavern’s list of beers includes your favorite local and regional breweries, with the age old standards Bud, Miller, and Yuengling on tap as well.  Local breweries are well represented at Stones Throw Tavern. If you prefer a sour brew, than Acid from Snafu might be to your liking. The Park Circle Pale from Commonhouse, and the Idle Speed from Palmetto (lager) are a nice change from the norm. Holy City’s Pilsner has become a local favorite. Maybe take a walk on the wild side and try Dance Naked (IPA) from our own Rusty Bull Brewing Co.

Two unique brews that have become all the rave are, Southern Tier’s Nitro Coconut Truffle (hearty stout ideal with dessert), and the out of this world concoction known as Space Dust from Elysian Brewing Co. Both are ideal cold brews that will bring your stress level down after a tough day at work.

Stones Throw Tavern’s preferred brewery is Wicked Weed, with eight of the Asheville NC, based company’s beers on tap including Freak of Nature, Pernicious, and the ever refreshing Watermelon Dragon Burst. If you’re the type who welcomes a hint of fruit in your brewksi, than I recommend Wicked’s Fresh Pressed lace with pineapple, mango, and guava. A smooth wheat beer that will take you to an island retreat.

Similar to the former eatery that occupied the space inside Northwoods Mall close to Dillards, Stones Throw features two oversized giant screens that can display a single game or show two, four, six or eight games on 55 inch screens. Overall when all the TVs are lit up, Stones Throw has 41 screens to showcase sports or topical news. Great when college and pro football return. 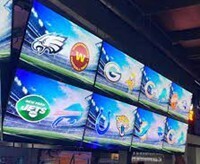 Now that things are slowly getting back to normal, and summer is vastly approaching, Stones Throw is a welcome watering hole smack dab in the middle of North Charleston. They plan live music on the open air patio, as well as midweek open mike nights and themed trivia. And while Stones Throw Tavern welcomes everyone who enjoy a hearty drink with handheld edibles, the underlying music theme from 11am until 2am closing time will be decidedly classic rock and country. Ideal for baby boomers!

Whether you’re shopping and need a quick bite, out on the weekend to watch the game with friends, consider putting Stones Throw Tavern on your todo list. They offer up a full bar with beer, wine, and cocktails. It’s quite possibly a stones throw from many places in the north area, just off Ashley Phosphate exit at Northwoods Mall and Rivers Avenue. Visit their Facebook page for more at https://www.facebook.com/stonesthrowtavern/

A Complete Guide to Picking the Best Air Fryer