ESTERO, Fla. – Blake Hillman scored twice, including the game-winner exactly four minutes into overtime, to give the South Carolina Stingrays (24-19-9-3) a 3-2 win over the Florida Everblades (33-17-2-2) Wednesday night in the opening match of a 3-game set this week at Hertz Arena.

Forward Brett Supinski also picked up a goal in the second period and an assist on Hillman’s overtime strike, while Matthew Weis had two assists and goaltender Alex Dubeau stopped 32 total shots including multiple crucial saves late in the game to earn his 13th win of the year.

South Carolina took the lead in the opening frame when Hillman netted his second of the season at 6:57. The defender found an open spot in the slot and waited for the puck to find him before quickly firing a wrist shot past goaltender Jake Hildebrand to make it 1-0. Assists went to forwards Justin Florek and Dylan Steman, who won a battle deep in the zone to keep the play alive. 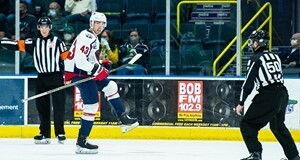 The Rays had an 11-5 edge in shots on goal after the first, but Florida battled back in the middle frame and tied the game at 1-1 when Myles Powell scored shorthanded at 8:58.

Supinski re-gained the lead for SC at 6:50 of the third by sweeping a rebound off a shot by defender Tyler Nanne into the net for his 10th of the year. The goal, which had a second assist from Matthew Weis, put the Rays up 2-1.

The Everblades wouldn’t go quietly, however, evening the game once again at 2-2 on a goal by Blake Winiecki at 14:50 of the third, and the teams headed to overtime to decide a winner.

Florida started the extra session with a brief 4-on-3 power play opportunity due to a late penalty to SC’s Max Novak for hooking, but the Rays were able to kill off the early advantage.

After Dubeau made saves on four different Everblades chances, Hillman’s winner was set up by Weis, who found Supinski with a drop pass at the top of the Florida zone. Supinski drove towards the net and left the puck in front for Hillman, who had an initial chance stopped before burying the rebound.

Florida put 34 shots on goal in the game, while SC had 30 chances on net. Neither team converted on any of their power play opportunities, with Florida finishing at 0-for-4 while the Rays ended at 0-for-5. Hildebrand turned aside 27 shots in a losing effort for the Everblades.

The Stingrays continue the series at Hertz Arena on Friday night at 7:30 p.m. and conclude their 6-game Florida road trip Saturday evening at 7.