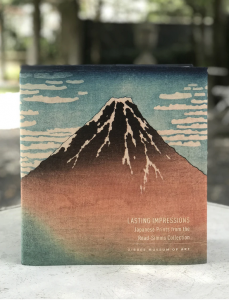 The Gibbes Museum of Art has published a fully illustrated catalog featuring a selection of the museum’s extensive collection of Japanese woodblock prints that also interprets how Charleston played a key role in the Golden Age of Japanese print collecting. The publication, Lasting Impressions: Japanese Prints from the Read-Simms Collection, explains how Japonisme, or the influence of Japanese art, enthralled Charleston in the late 19th century. The catalog highlights 60 of the finest examples of ukiyo-e, or Japanese woodblock prints, from the Gibbes’ collection that consists of nearly 600 pieces, all gifted by Mary Read Hume Simms and her family.

“As home to one of the most significant collections of Japanese woodblock prints in the Southeast, we are thrilled to capture these works in a dedicated catalog that shares the city’s artistic past with audiences beyond our community,” said Angela Mack, executive director of the Gibbes Museum of Art. “The collection impacted and inspired much of the art that succeeded it in Charleston, which is why we must preserve and tell its story. Its history is our history and we are thrilled to see this publication come to fruition.”

Most Westerners were introduced to Japanese art through world’s fairs and expos during the mid-to-late-19th century, first in Paris and London, followed by Philadelphia and Chicago. In the early 20th century, the passion for collecting Japanese prints spread to Charleston, where ukiyo-e prints were immediately embraced by the city’s artists and art enthusiasts. Most notably, famed artist Alice Ravenel Huger Smith found inspiration in Japanese styles to shape her paintings and images of the South Carolina landscape.

The pieces included in the catalog were carefully selected by Japanese fine art specialist and scholar Sebastian Izzard, Ph.D., based on quality, condition and rarity. In addition to selecting the prints, Dr. Izzard contributed insightful entries for each image so that readers can appreciate the nuanced culture of the Yoshiwara red-light district, the genius of individual artists and the quality of each impression. The publication also features an in-depth essay on the Read-Simms family by the Gibbes’ Director of Curatorial Affairs, Sara C. Arnold and writer, Stephan G. Hoffius, that details their connection to Charleston and how they came to acquire such a comprehensive collection during the 20th century’s Golden Age of Japanese print collecting.

The publication coincides with a major exhibition of the same title that is open to the public from April 30, 2021 – October 3, 2021 at the Gibbes Museum of Art.

The exhibition, Lasting Impressions: Japanese Prints from the Read-Simms Collection, will showcase 60 exceptional and rare prints amassed by Charleston collector, Motte Alston Read, and his sister, Mary Read Hume Simms of New Orleans, during the first decades of the 20th century, a period often referred to as the Golden Age of Japanese print collecting. The Read-Simms Collection was donated to the Gibbes in 1947 and reflects the full range of popular print subjects by master Ukiyo-e artists of the Edo period, from dramatic Kabuki theater actors, portrayed by artists Suzuki Harunobu and Tōshūsai Sharaku in the 18th century, to vibrant landscapes by artists Utagawa Hiroshige and Katsushika Hokusai in the 19th century.

To purchase the catalog, visit the Museum Store. For more information about the special exhibition, visit www.gibbesmuseum.org.

Follow us
Related Topics:gibbes museum of artLasting Impressions: Japanese Prints from the Read-Simms Collection
Up Next