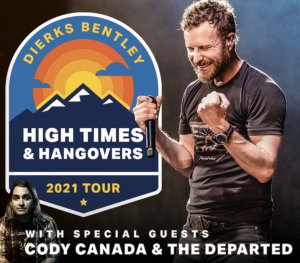 Multi-platinum Country singer/songwriter Dierks Bentley will perform at The Windjammer on Tuesday, May 11th at 7 pm. His “High Times & Hangovers” tour stop will be held on the venue’s outdoor stage and will also include Cody Canada & The Departed.

Bentley has earned 17 career No. 1 singles; garnered nominations from the ACM, CMA, GRAMMYm and Billboard Music Awards; and has also served as a Grand Ole Opry member for over a decade. He has tallied two platinum albums – 2003’s self-titled record and 2005’s Modern Day Drifter. He is best known for the singles “Up on the Ridge,” “Home,” “Riser,” “Black,” and “The Mountain.”

Tickets are $40 and on sale here. The show is 21+ only. If for any reason the show needs to be moved indoors, only the first 400 tickets will be valid for entry, outdoor-only tickets will be marked before purchase.
–