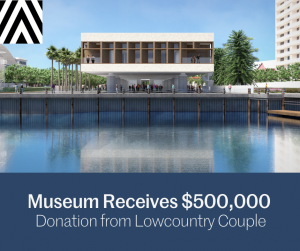 The International African American Museum today announced a $500,000 donation from Mary Major and Bill Horton, a couple living 10 miles from Gadsden’s Wharf, the site where more than 40 percent of enslaved Africans arrived in America. The wharf, which was originally built in 1767 in Charleston, is now home to the museum, which is projected to open in 2022.

During the Transatlantic slave trade, South Carolina received more enslaved people than any other mainland colony, according to the Preservation Society of Charleston. As many as 260,000 enslaved Africans entered South Carolina from 1670 to 1808. Most disembarked at Gadsden’s Wharf on the Cooper River in Charleston, between what are now Calhoun and Laurens Streets.

“We wanted to support the creation of a place to remember and honor those African Americans who have contributed so much to our country,” said Mary Major and Bill Horton. “The International African American Museum will play a role in confronting and dismantling the racism and discrimination that remain prevalent in large parts of our society. It will showcase not just past injustices, but also those African American leaders who have paved the road toward a fairer and more inclusive country. The museum will be a wonderful setting for education, reflection, and dialogue. We are proud to join Joe Riley and many others who have made the International African American Museum a reality.”

The International African American Museum will explore cultures and knowledge systems retained and adapted by Africans in the Americas. It also will teach the diverse journeys and achievements of these individuals and their descendants in South Carolina, the United States and throughout the African Diaspora. Exhibitions will feature historic figures, events and experiences from enslavement through the 20th-century civil rights movement to the present.

“People across the country are confronting racial injustice in extraordinary ways – from protest marches to community summits – with unprecedented diversity at the table,” said Dr. Tonya M. Matthews, the recently named CEO of the museum. “We can look to history for guidance on how we carry on in these watershed moments. The International African American Museum will not only provide a look back, but also a look beyond. We hope to educate and inspire, prompting our visitors to work for social justice and equity. This month’s verdict to convict Derek Chavin was the right decision, and we welcomed it with great relief. Singular moments like this are important, but can’t fix an entire system. There is still work to do, and we are grateful to Ms. Major and Mr. Horton for believing in us to make a positive difference.”