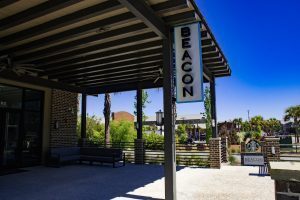 Beacon Community Bank, a privately held community bank founded in Charleston, has increased its footprint with the addition of its third branch, now open at 20 Fairchild Street, Suite 103 on Daniel Island.

“As we continue our expansion across the Charleston Tri-County area, Daniel Island is a natural move,” said Brooks Melton, President & CEO of Beacon Community Bank. “Island residents and businesses now have the opportunity to experience the personalized service and inherent advantages offered by a homegrown local bank. Our entire team is excited to join the Daniel Island community.”

In January 2018, Beacon opened its first branch in Downtown Charleston on East Bay Street. A second branch followed in Mount Pleasant on Houston Northcutt in May 2019. The third branch on Daniel Island is an integral part of the Bank’s five-year expansion strategy, with plans to break ground on the bank’s fourth branch and corporate headquarters later this year on Highway 17 North in Mount Pleasant. A fifth local branch will follow in 2022 or 2023.

“I remember touring the Daniel Island Club grounds with Tom Fazio over 20 years ago before the clubhouse was built,” said Tommy B. Baker, Chairman of the Board of Beacon Community Bank. “I was so impressed with the vision of the island. I became  the first member of the club and have been a member ever since.” Baker added, “It’s been amazing to watch the island grow from an idea to a thriving small city. The island is youthful, and we’re a young bank. We know you by name, our turnaround  times are phenomenal, and we’ll over service you.”

With 300 local shareholders and an 18-member board of Charleston’s most distinguished leaders and business owners, Beacon was the first community bank to form in South Carolina in nearly a decade when it was founded in 2018.

Growing up in the Amazon, Coming of Age in America