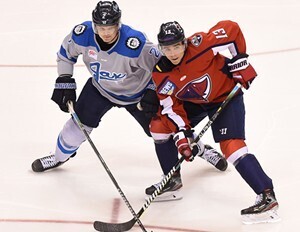 Pascal Aquin knocked home a rebound 4:33 into overtime to give the Jacksonville Icemen (21-18-3-3) a 4-3 win over the South Carolina Stingrays (19-16-8-3) on Saturday during Space Wars Night at the North Charleston Coliseum.

Stingrays’ forward Max Novak picked up assists on two of his team’s goals, while forwards Cole Ully and Cam Askew found the back of the net and defender Tyler Nanne registered his first pro tally. Goaltender Sean Romeo made his first appearance for South Carolina and turned aside 30 shots in a losing effort.

Jacksonville started off the game with an early 1-0 lead after Abbott Girduckis scored at 1:33 of the opening period.

South Carolina responded to the game at 14:25 of the frame when Ully netted his 16th of the season on the power play. The team’s leading scorer was open just outside of the crease and the puck came to him for the strike that had assists from Novak and Mark Cooper and made it 1-1.

Ully is now on a season-high 8-game point streak, while Cooper has totaled five points in his last three games this week.

The Rays took a 2-1 advantage less than two minutes later when Askew scored his eighth of the year from forward Tim Harrison at 16:17. A bouncing puck found its way to the attacker in the slot and the Boston, Mass. native unleashed a shot past goaltender Charles Williams to give SC to lead.

Derek Lodermeier evened the game back up for Jacksonville at 2:03 of the second, tying things up at 2-2.

Then at 5:40 of the middle frame, Nanne fired a shot from the right point that snuck past Williams to put South Carolina back on top 3-2. Assists on the strike went to Novak and captain Andrew Cherniwchan.

But the Icemen quickly tied the game back up at 3-3 on a goal by Mike Szmatulza at 7:31 of the second.

Neither team was able to find the back of the net in the third and overtime was necessary, earning the Stingrays one point in the standings.

Aquin’s game-winner came on a rebound after an initial save by Romeo on Erik Bradford. Jacksonville has now won six of the 11 meetings between the two clubs this season.

Both clubs scored once on the man-advantage, with SC finishing 1-for-4 and Jacksonville ending at 1-for-2. Williams earned the win for the Icemen, stopping a total of 29 shots in the crease. Jacksonville outshot South Carolina 34-32 in the contest.

The Rays and Icemen are back at it on Sunday afternoon in Jacksonville at the Vystar Veterans Memorial Arena. Puck drop is scheduled for 3 p.m.