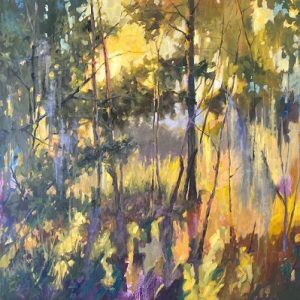 Five years ago, Meyer Vogl Gallery opened its doors and debuted its first-ever exhibition, Duet. The joint show was a collaboration between Laurie Meyer and Marissa Vogl, co-owners of the gallery. In the years since, the gallery has come to represent dozens of artists and host an abundance of shows. But, in honor of its fifth anniversary, what better way is there to celebrate than to get back to the gallery’s roots and revisit that first show, Duet?

Duet, Deux opens April 2nd and will feature new work from both Meyer and Vogl. The artists have been creating work that is unique to their own styles and that honors their growth since the opening of the gallery five years ago.

“Today I paint for the fifth anniversary of Meyer Vogl Gallery, a dream realized, and feel the need to do my best to express my gratitude for our humble space at 122 Meeting Street,” Meyer said. “I want the work to complement that of Marissa Vogl, while also revealing any personal growth I have gained in the past five years. Marissa’s work has become more liberated in the last five years and I await with great excitement for our opening of Duet, Deux.”

She adds, “I wake each morning knowing that my work, my labor, my contribution, is a stairwell away in my studio. I meet it with either great celebration or silent frustration and I quickly learn what the day has in store. As always, there will be light and color and a solemn appreciation for the world I live in.”

An all-day pop-in opening celebration of Duet, Deux will be held on Saturday, April 3rd, from 10 am to 5 pm, during the Queen Street Stroll, and the show runs until April 23rd.

The Meyer Vogl Gallery is located at 122 Meeting Street.

Locals can Hop On Down To Wild Dunes Resort This Easter