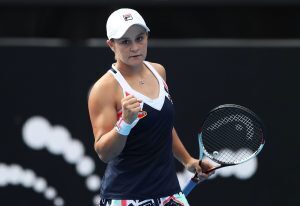 The Volvo Car Open, to be held without fans April 3rd to 11th on Daniel Island, today announced its preliminary player field for the 2021 tournament. The field for the women’s professional tennis tournament is led by World No. 1 Ashleigh Barty (right) and features some of the top players in the world.

The Volvo Car Open’s 56-player draw is made up of 43 direct entries into the tournament, five wild cards, and eight qualifiers. Kim Clijsters has already accepted a wild card for the event. Four additional players will join the main draw via wild card entry, to be announced at a later date.

“The world of live sporting events has had to make many difficult decisions over the past year,” said Bob Moran, Tournament Director for the Volvo Car Open. “We wish we could host a stadium full of fans in 2021 to appreciate the world-class talent represented in our player field, from WTA’s top-ranked Ashleigh Barty and our defending champion Madison Keys, to next generation tennis stars like Sofia Kenin and Coco Gauff. We are grateful that our broadcast partner Tennis Channel will air first ball to last ball main draw matches, providing our fans with more than 70 hours of live tennis and an opportunity to watch the powerful and entertaining competition on our courts this year. We look forward to getting back to normal in 2022 with a newly renovated stadium and celebrating 50 years of professional women’s tennis.”

Highlights from the main draw include:

At the top of the Volvo Car Open player field is current World No. 1 Ashleigh Barty. The 2021 Volvo Car Open will mark the Australian’s second time playing in Charleston. She has held the top WTA singles ranking for the past two seasons, stemming from winning her first Premier Mandatory title at the Miami Open, her first Grand Slam title at the French Open and her first WTA Finals title.

American Sofia Kenin celebrated her first Top 10 season in 2020. She earned her first Grand  Slam title at the 2020 Australian Open and ended the year as World No. 4. The 2021 Volvo Car Open will be the 22-year-old’s fourth time competing in Charleston.

2018 Volvo Car Open champion Kiki Bertens will play the Volvo Car Open for the fifth time. The Dutch player finished 2020 in the top 10 for the third year in a row and has amassed 10 career WTA titles.

Rounding out the top-four in Charleston’s player field is Garbiñe Muguruza. Since her last appearance at the Volvo Car Open in 2013, the Spanish player has captured seven career titles, including the 2017 Wimbledon and 2016 Roland-Garros titles, and reached the World No. 1 ranking.

The 2021 Volvo Car Open will be held without fans due to the ongoing pandemic. The tournament has partnered with the WTA and the Medical University of South Carolina to develop its health and safety protocols for the event, which will allow the team to create a safe atmosphere for players, essential staff and operational partners. Both Tennis Channel and WTA Media have agreed to broadcast the 2021 Volvo Car Open, providing a full week of coverage and more than 70+ hours of live tennis for fans both in the U.S. and abroad.

The Volvo Car Open was canceled in 2020 due to the coronavirus pandemic. Since 1973, the tournament has been a pioneer in women’s professional sports, paving the path for female tennis players to receive equal recognition, respect and pay in the sport. Originally held on Hilton Head Island, the event moved to Charleston in 2001 and is now played on Daniel Island at the LTP Daniel Island tennis center, home to the Volvo Car Stadium.

Charleston Tennis, LLC, which manages the Volvo Car Stadium under a lease from the City of Charleston, recently announced plans to renovate and modernize the 20-year-old Volvo Car Stadium. The city-owned facility will undergo upgrades to enhance the stadium experience for patrons, performers, tennis players and event management, allowing the venue to attract world-class athletes and talent to Daniel Island.