Returning to the ice for the first time in nine weeks, goaltender Hunter Shepard stopped 40 shots and led the South Carolina Stingrays (12-8-6-2) to their third straight win by a 5-3 score over the Jacksonville Icemen (10-12-1-2) Friday night at the North Charleston Coliseum.

Despite being outshot 43-16 in the contest, South Carolina struck five times, including four goals in the third period. 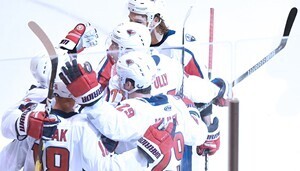 Forward Max Novak assisted on four of the Stingrays’ five goals, while attackers Andrew Cherniwchan and Cole Ully each had a goal and an assist and second-year forward Dylan Steman earned two helpers.

The Icemen scored first at 16:40 of the opening frame when Christopher Brown finished off an odd-man rush with a wrist shot that beat Shepard to make it 1-0.

Captain Cherniwchan evened the score at 1-1 with his fourth goal on the season during a power play at 16:54 of the middle period. The Hinton, Alberta native put the puck up high over goaltender Charles Williams with a wrist shot from the left circle, assisted by Novak and defender Jesse Lees.

With the game all square in the third period, SC broke through to take their first lead at 4:04 when Ully found forward Matthew Weis open in front of the Jacksonville net for a strike to make it 2-1. Novak registered the second assist on the play, which gave Weis his second goal of the season.

Just 39 seconds later, defender Cole Fraser caught the Icemen with their guard down, scoring with a quick shot to the top left corner of the net to extend South Carolina’s lead to 3-1. Both Steman and Cherniwchan earned assists on Fraser’s second goal of the year.

Ully made it 4-1 at 10:08 of the frame after a turnover by Jacksonville in their own zone. Novak pounced on the loose puck and fed the Calgary, Alberta native for his team-leading 12th goal.

But the Icemen did not go down without a fight, scoring twice in the final two minutes of the game with the goaltender off the ice in favor of an extra attacker. Nick Saracino cut the lead to 4-2 at 18:10 of the third before Trevor Hamilton scored to make it a one-goal game at 18:55.

After a Jacksonville timeout, the Rays were able to win the puck out of their zone and set up rookie forward Jade Miller for his first professional goal into an empty net with 4.4 seconds remaining.

South Carolina finished 1-for-4 on the power play, while the Icemen ended at 1-for-5 on the man-advantage. Williams had 11 saves in a losing effort for Jacksonville.

The Rays and Icemen complete their 3-game series Saturday on Pink In The Rink Night at the North Charleston Coliseum at 6:05 p.m.

Cougars Fall to No. 23 Crimson Tide in Series Opener