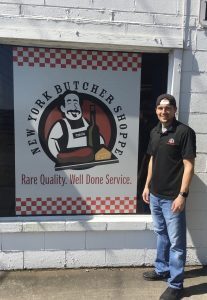 By: Claudie Benjamin, Guest Writer
Devin Kelly’s grandparents opened a Kentucky Fried Chicken in the 1970’s in Waverly, the small Ohio town where he grew up. His parents took over in 2000, managing the store over the next 18 years. Devin started working there in this spare time beginning at age 14 and stayed informed about the business, learning the ins and outs of managing a KFC. He says he liked that the store and his family were a big part of the community.
Going on to earn a BA in entrepreneurship at the Carl H. Lindner School of Business, University of Cincinnati gave him an educational background and skills that were widely transferable.
Initially on moving to Charleston, Devin found work at Blackbaud in software sales. With the turbulence of the pandemic period he started looking for something that matched his interests and offered a potential for growth.  He found exactly what he was looking for When he met up with The New York Butcher Shoppe corporate leadership which is based in Greenville, SC.
The whole operation was appealing.  For one, Devin has a passion for the idea of franchising and becoming involved with a concept that has proven success in meeting customers’ needs.
Also, his background and engaging personality made him a good match for this franchise’s concept, committed to mom and pop personalized service.  Originally from New York City, the founders of the business opened their first store in Mt. Pleasant 22 years ago. The New York Butcher Shoppe conveys a trendy, but not snobby atmosphere where high quality  cuts of meat are provided alongside delicious premade comfort foods like chicken parmesan and roasted chicken. Reasonably priced meals for 2 or 4 people in a recent week included Meatball Parmesan, pasta, salad and bread. 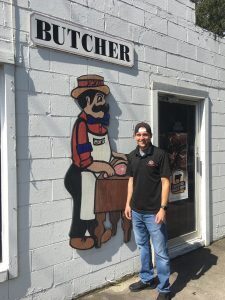 Devin says he likes the hands-on focus of the store. He particularly enjoys being able to have a part in the full experience of the customer when they come in asking for help planning for dinner for guests and then working with that customer on everything from budget, to choosing a specific cut of meat, to calculating  cooking time. Salads are fresh and very varied.  An online newsletter reminds customers of weekly specials like shepherd’s pie and prime rib. Devin describes prices as “something for everyone” from hamburgers to Japanese A5 Wagyu.
Excited by the promise of connecting with this established business, Devin in partnership with his brother-in-law, retired pro hockey player, now owner of Hunter Bishop Hockey, Hunter Bishop  “purchased the territory from Summerville to Savannah.”  They hope to open a new New York Butcher Shoppe every year or so. in communities that may include Hilton Head, Bluffton, Beaufort and Savannah.
The first of their stores is set to open at the end of May in the Nexton community in Summerville. In preparation for his role in managing his soon to open New York Butcher Shoppe, Devin has spent the past four months training at the Mt. Pleasant store and being mentored at the corporate headquarters.  \The territory he’s acquired will allow him to commute from his home on Daniel Island he shares with his wife, a speech therapist at North Charleston Elementary School and their identical 15 month old twin daughters.