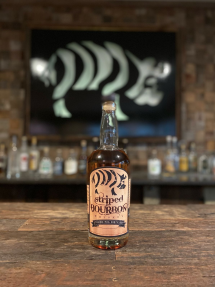 In celebration of National Pig Day (March 1st), 140 bottles of the 100-proof Bourbon will be released for sale on a first come basis and, based on previous special releases, are expected to sell out very quickly.

The concept of bottled-in-bond has been around for over a century, originating with the Bottled in Bond Act of 1897 to ensure the integrity of whiskey. Now its high standards serve as an indicator of transparency, quality, and authenticity. Customers have the unique opportunity to buy a bottle of history and experience a coveted local bourbon, whose distinctive flavor profile will be unique to barrel, location and even the weather it’s experienced while warehoused. To purchase visit https://stripedpigdistillery.square.site.

“The aroma of this bourbon is heavenly, and it has a perfectly rich hue of maple syrup,” CEO Pixie Paula Dezzutti said. “I taste a heavy opening of brown sugar, caramel, and vanilla, followed by notes of molasses, raisin, pepper, spice and licorice, finishing with hints of leather and earthy tones. I feel like this is a milestone for women in the beverage business – to be able to open this cask and be the first to taste this bourbon knowing there will only be 140 bottles on the planet, it feels like a historical accomplishment.”

In December 2014, SPD sold out of its very first limited release single-batch, single barrel bourbon – it was also the very first of its kind to ever come out of South Carolina. Only 150 bottles were made and sold. This year’s limited release also marks a first for SPD and for the area. Drinking bottled-in-bond bourbon has been described as a holy-grail experience, as every bottle can be traced back to one barrel. Every barrel ages differently depending on where and how it is stored, the aging process, as well as on the composition of the cask.

The Limited Release Barrel-in-Bond Bourbon is only available for purchase at the distillery: 2225-A Old School Drive Charleston, 29405. To reserve a bottle for pickup, visit: https://stripedpigdistillery.square.site.

For more information about the distillery, Tours and Tastings, visit: www.stripedpigdistillery.com.