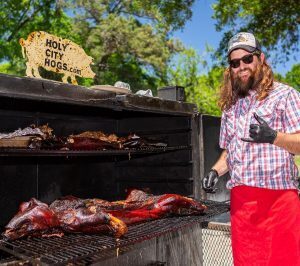 Tank Jackson of Holy City Hogs was recently announced as a co-host on an all new discovery+ series called Moonshiners: Smoke Ring. Legendary Moonshiner Stephen Ray Tickle will join Jackson on the show as they venture into the deep South to showcase the best barbecue pitmasters in the country.

discovery+ describes the series as follows:

“From the Carolina backroads to the Appalachian mountains, Moonshiners: Smoke Ring spotlights the underground world of barbeque and pitmasters who will use their special skill-sets to compete for the title of Smoke Ring champion”

The new series debuts on March 9th. You can learn more about discovery+ here.

To learn more about Moonshiners: Smoke Ring, click here and watch the preview below.

You can learn more about Holy City Hogs at holycityhogs.com.
–