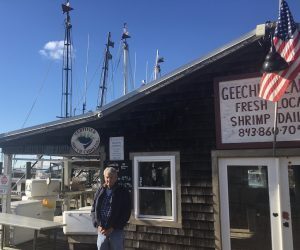 Geechie Seafood is located at 248 Magwood Lane on Shem Creek in Mt. Pleasant. Going back decades, beginning in the 1930s, Shrimp trawlers along Shem Creek were a usual sight. Other small boats and yachts also found that the shelter there was better than in Charleston Harbor that was more suited to larger boats and ships. At one time, a thriving ice crushing business, and bucket-making firm were among other Shem Creek enterprises that supported shrimping.

Geechie Seafood owner Warren (Bubba) Rector recently talked about his life in the shrimping industry. He grew up in Awendaw, a small community north of Charleston and started working on the shrimp boats while still in high school. Some years later, he bought a boat with his brother-in-law. They worked together until Bubba bought him out and went on working in shrimping, spending part of the year in Florida. He leased a parcel of land on Shem Creek to dock his boat.

“Although some people say the brown shrimp are sweeter,” Kevin comments, “they taste the same to me.” Bubba says that Joshua Rector, another grandson, recently bought his own shrimp boat. “He’s restoring it and getting it ready for spring.” 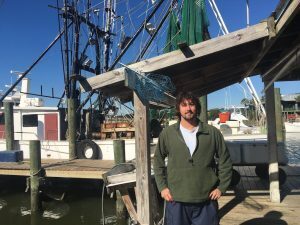 “I’ve been working in the shrimp business all my life,” says Bubba. Kevin uses the same words to describe his own experience. “There are a lot fewer shrimp boats than there once were,” says Bubba. Some shrimpers got out of the business during a time when imported shrimp were coming to market. He also says that while he has a very good crew, one he’s had for a long time, it’s hard to find a crew to run another boat.

The many locals and visitors to the Charleston area who come to buy shrimp at Geechie Seafood get some sense they are stepping back into a bit of local history. Although they may not know that Shem Creek gets its name from the Sewee Native American tribe that lived along the shores and called it “Shemee.” The picturesque creek, lined with bars
and restaurants may be a bit quieter than before the COVID period, but small boats are going and returning to dock as much as ever.

Locals go out to view the sunset taking the road past Geechie Seafood, or strolling along Shem Creek Park the other side of the creek with views of the wetlands, they see large pelicans perched on the masts of shrimp boats.

The park is a natural preserve. Walkers are sure to spot snowy egrets, heron and cormorants. Geechie Seafood opens at 9 am and closes at 6 pm. So, there’s time to catch the sunset and pick up some shrimp for dinner. The shop is open 7 days from May to January, and weekends during the January-March winter season. 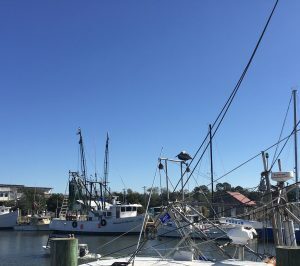