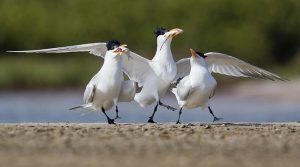 You might refer to Steve Ellwood as the invisible man.

That’s because when he’s shooting his favorite avian subjects along South Carolina’s Hammock Coast, that’s exactly how he likes to be seen – or, rather, not seen.

“I do take great care in being a background rather than an intrusion of the environment I go into,” Ellwood said in a recent telephone interview from his Murrells Inlet home. “It plays into calming the birds, and it plays into just being respectful of them.

“The calmer they are, the more they’re going to act like themselves or how they act when I’m not there. That’s when you get those great moments. That’s when they’re not paying any attention to the human over there with a camera.”

Nearly 100 of those great moments Ellwood has captured over the past 20 years are now featured in a book titled “In the Moment: A Photographic Journal By Steve Ellwood.”

The 80-page book features extraordinary photos of birds in Florida and South Carolina. The majority of the shots are from Georgetown County, South Carolina, with the lion’s share of those shots from Huntington Beach State Park, the 2,500-acre park that Southern Living has proclaimed the “best birding site on the East Coast.”

“In the Moment” is Ellwood’s first book and the first time he faced the daunting task of narrowing the tens of thousands of photos he’s taken down to a few dozen for the book.

“It’s been 20 years in the making,” he said. “It’s very exciting to finally get this collection together and be able to share it.”

The soon-to-be 63-year-old (he was born on Christmas Day in 1957) grew up in Michigan, but he and his wife, Andrea, moved to the South Carolina coast in 1980. The first place he visited was Huntington Beach State Park.

“I was so taken by it all — Atalaya, a castle on the beach; the abundance of birds; the large pond across the marsh on the causeway; just everything,” he said. “It was so different than any other park I’d ever seen anywhere.”

It was 20 years ago, though, when the state park truly became a “home away from home” for Ellwood, who’s employed as senior art director for LHWH, a marketing and public relations firm in Myrtle Beach.

“That’s when,” he said, “I dove into bird photography.”

It’s a passion that has led him on annual spring sojourns to both coasts of Florida and the Everglades to capture the birdlife in the Sunshine State before returning to the Palmetto State for his near-daily life of capturing what he dubbed “really amazing moments and encounters with wildlife here.”

“I had brought together all these images on my computer, and I thought how great would it be to put them all into one place to share with everyone,” Ellwood said of his new book.

Those digital images – he’s never shot on film – have been preserved on CDs, DVDs, digital backups with redundancy after redundancy to ensure preservation.

Often Ellwood shoots his photos from the ground, crawling along the sand and marshes so that he’s on the same level as his feathered subjects. Sometimes, he’s hidden under a thin nylon drape of camouflaged material – so still, so invisible, in fact, that birds have landed on his head, none the wiser to what’s underneath.

“I love ground shooting,” he said. “It does a lot of interesting things to the image, but, more importantly, it relaxes the birds. If I were to walk up to a flock of birds, more than likely, they’re going to scatter. Getting down low puts me inside their world. It lets me see them like they see each other.”

Those ground shots, enveloped in a creamy background and foreground of sand, have yielded amazing shots of Royal Terns and American Avocets and more. His on-the-water images are soaked in incredible shots of gliding Black Skimmers and skittish Kingfishers, not to mention Osprey, Herons and Egrets.

The wildlife he’s shot comes alive in myriad settings. There’s the photo of a Least Turn tossing a ghost crab in the air after the unfortunate crustacean came too close to a guarded nest. There’s a nest of Burrowing Owlets peering directly into his telephoto lens. And there’s photo after photo of birds, some inland, some at Brookgreen Gardens, seemingly dancing among the sand, the marsh, the rivers, the maritime forests and the seashore. But it’s the state park where so many of the book’s images were snapped.

“I can’t get enough of the park,” Ellwood admits. “I’m a five-day-a-week worker, so Saturday and Sunday mornings are my go-out-and-get-it days, so I’m up before sunrise and in line waiting for the park gates to open. If I can get there before the sun breaks the horizon and be in position, that’s great, because I’m not walking into a group of birds; I’m waiting for them to come to me.

“The park has so many different settings within it for a photographer. You’ve got the causeway for the flight photographer and action photography and the sheer number of birds, including Bald Eagles and Osprey. You go up to the jetty for the shorebirds and birds that are migratory in cooler months that I’ve never seen anywhere else before. The park offers different sweet spots for backgrounds and species. There are just little areas that are remote, too, that will have species that are not seen at the causeway.”

For Ellwood, Huntington has been his weekend away from home for the last two decades. He joked that his wife knows if she needs him – be it on weekends, vacation days, holidays, even Christmas morning – that she’ll know to find him at the park.

“It’s one of my favorite places I’ve ever been in my lifetime on the planet,” he said. “There are places where you can sit in that park and find pure serenity. It’s always been a place that’s very therapeutic for me. I find great stress relief being grounded in nature. The park is a real gem for this area — that and Brookgreen Gardens. Those are two special places for our area and for South Carolina.”

Ellwood’s publisher, Sheriar Press, has developed a web extension of the book at www.InTheMomentBook.com, where readers can learn more about his journeys and special moments in a collection of “How I Got the Shot” stories.

In one titled “Eye On the Prize,” Ellwood describes his shot (used on the book’s cover) of a Cattle Egret in an unusual habitat for the bird – hunting in the water.

“In my 20 years of prowling Huntington Beach State Park in Georgetown County, S.C.,” Ellwood writes, “I’d never seen one of these golden-coiffed Egret standing in or near the water. … I was captivated by its laser-like stare, the disciplined patience of the hunt. When the Egret struck, its flashing skill caught me (and the frog!) by surprise.”

His essays are proof positive that Ellwood’s talent even extends beyond his telephoto lens.

“All my photos have stories to them,” he said. “Some of them are heartwarming, some are comical, some are shocking. Some move me emotionally because of something I’ve never seen anywhere before.

“I hope that the book and the stories on the website explain to people that it’s much more than photography, even though that’s very important to me. Birds are talking to us and telling us what we need to pay attention to. There’s just no shortage of awe in the bird world. I’m reminded of that often when I’m out there.

“We are so blessed here to have the surroundings that we do. We are blessed to get away from the paved streets. It’s a blessing to access these places of refuge and serenity. I look to many more years of enjoying it. As long as I can get down on the ground and get down on their world, I will.”

So on any future weekend, expect Ellwood to be at Huntington Beach State Park. You may not see him. He may be, after all, as invisible to us as he is to his favorite subjects – the birds.

“In the Moment” is available for purchase for $45, plus tax and shipping, at www.InTheMomentBook.com.

Follow us
Related Topics:Huntington Beach State ParkSteve Ellwood
Up Next