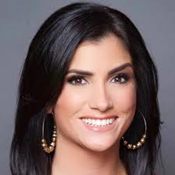 Those who are aware of Dana Loesch know she’s a straight shooter, and I’m not referring to her being a gun toting, former spokesperson for the NRA (National Rifle Association), rather I’m alluding to her brazen, no holds barred views on God and patriotism, coupled with her disdain for partisan politics, socialism, and the current democratic party.

Loesch is a staunch supporter of faith, family, the constitution, and the second amendment. A former writer and editor for Breitbart News, host of the program Dana on TheBlaze TV (2014-17), and noted conservative author, Loesch is not afraid to speak her mind, nor share her views on any number of national news outlets, having been featured on CNN and Fox News.

Earlier this year Loesch offered up her third book ‘Grace Canceled: How Outrage is Destroying Lives, Ending Debate, and Endangering Democracy’, a provocative and eye opening revelation on how resentment is tearing the country apart. Among the 158 pages Loesch touches on everything from ‘milkshake ducks’ and ‘cancel culture’ to ‘rage mobs’ and ‘leftist history’, as well as the liberal medias love affair with the hypocrisy.

In ‘Grace Canceled’ Loesch recounts how far the democrat party has moved to the left since Bill Clinton’s presidency, becoming a shadow of its former self. Writing from a Christian perspective, Loesch admits while being a woman of deep faith it’s hard to fathom the angst many Americans harbor toward one another. The underlying theme in ‘Grace Canceled’ screams out ‘why can’t we agree to disagree without all the mayhem’. A society addicted to outrage is in trouble.

No subject matter is off the table, as Loesch recalls how the leftist and socialist movements have advanced since the Obama era, only adding fuel to the fire due to their genuine hatred of Donald Trump. Loesch revisits the Brett Kavanaugh hearings, and the incessant attack from democrats on Trump and the republican party. She adds patriotism and freedoms are under attack in America.

Loesch further notes the socialist baton has been passed from Bernie Sanders to Alexandria Ocasio Cortez (AOC). Loesch admits that sometimes anger is a good thing, but when its sole intent is to destroy people lives than it often goes to far, thus her disdain for Twitter and Facebook trolls who hide behind the confines of social media with little regard for the people they are attacking.

While there are many insightful and thought provoking passages in ‘Grace Canceled’, among the few that standout are ‘Antifa is a movement of adult toddlers who never learned the life skill of peacefully co-existing in a diverse society’ (page 25). She appears to have the rattled the playpen of the malcontents.

Many first became acquainted with Loesch with the release of her 2014 book, ‘Hands Off My Gun: Defeating the Plot to Disarm America’. In it she gives readers a history lesson on why America’s founding fathers included the right to bear arms in the Bill of Rights, and what confiscating arms today would mean to America.

Her follow-up book (2016) ‘Flyover Nation: You Can’t Run a Country You’ve Never Been To‘, discusses the divide between elitists and every day Americans, focusing on politicians who have little in common with what voters actually think, causing more separation than unity in the United States.

‘Grace Canceled: How Outrage is Destroying Lives, Ending Debate, and Endangering Democracy‘ brings Dana Loesch full circle. Whether you’re Christian or not, whether you support the democrat or republican party, Loesch offers up the obvious questions, ‘how and why have we reached this point in America?’.

Can Americans redeem themselves and extend empathy to their fellow man. Loesch wraps up her brief history lesson in ‘Grace Canceled’ proposing MGGA aka Make Grace Great Again, espousing a small ray of sunshine, that even with our differences there is hope for civil discourse. In closing she offers up several scripture verses that are not only relevant but prove helpful in the process. From her lips to God’s ears! Loesch provides a sample of inspirational grace, highlighting Congressman Dan Crenshaw’s appearance on Saturday Night Live. Grace under fire!

To discover more about Dan Loesch and her books visit her website at https://danaloesch.com/

5 Bookish Merch to Cozy Up With This Holiday Season