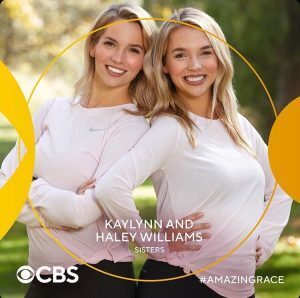 The Amazing Race, the popular adventure reality game show, returns to CBS on Wednesday and two sisters from Charleston will be contestants.

Haley (32) and Kaylynn Williams (30), who were born and raised in the Bluffton/Hilton Head Island area, will be featured on the show’s 32nd season. The sisters currently live in Charleston and are in the process of starting their our own real estate team.

“We watched The Amazing Race as a family when we were kids and thought it was the coolest, so when they came to us, we knew we couldn’t say no,” the duo said.

Haley and Kaylynn have been waiting for nearly two years for the premiere of their Amazing Race season. Haley said they filmed back in November of 2018, and at 9 pm on October 14th, they’ll finally see their debut on the series.

“After two very long years of keeping a massive secret, we’re so excited to share it with the world,” Haley and Kaylynn said. “Our experience on the show was insane! Your strengths are put to the test in every single way possible. You’re driven to mental and physical exhaustion for an entire month. At some points we were so tired we could barely speak words. With that being said, it was hands down the most magical experience one could imagine. You’re completely immersed into different countries and cultures and truly get to see how much compassion truly exists in the world. We were constantly shocked at how willing the locals were to jump in and help us.”

Follow us
Related Topics:Haley WilliamsKaylynn WilliamsThe Amazing Race
Up Next

Brighten up 2020 by Taking Part in Trident United Way’s Day of Caring on Nov. 20