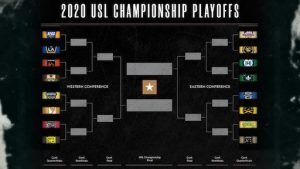 The Charleston Battery closed out the regular season on Saturday night with a 2-1 win over group rival Tampa Bay Rowdies. Charleston now travels to North Carolina to take on the Charlotte Independence for the first round of the USL Championship Playoffs on Saturday, October 10, at 7 pm.

The 2020 USL Championship Playoffs is a 16-team knockout postseason that includes the top two teams from 8 regional groups. The winner between Charleston and Charlotte on Saturday will meet the winner of Tampa Bay and Birmingham in a conference semifinal to be played October 16-18. Should Charleston advance and Tampa Bay lose their first-round match, the Battery will secure the right to host the conference semifinal at Patriots Point.

Every match of the 2020 USL Championship playoffs will air on ESPN+. The USL Cup Final, set for Nov. 1, will be the league’s first match to air nationally on ESPN.

The 2020 season marks Charleston’s thirteenth consecutive appearance in the postseason. Charlotte will be appearing in their third postseason and first since 2017.

Saturday’s conference quarterfinal will be Charleston’s second visit to Charlotte this season. On August 8, the Battery visited the Sportsplex at Matthews and forced a 1-1 draw with the Jacks. A cross by Zeiko Lewis in the 42nd minute deflected off Charlotte defender Aaron Maund for the equalizing own goal. It was the second match of Charleston’s nine-game unbeaten streak.

Charlotte finished the regular season 8-4-4 with 24 goals scored and 22 goals conceded. The Battery finished 9-3-3 with 26 goals while conceding only 15. Charleston’s defense has allowed an average 3.2 shots per game and will face a Charlotte side that’s averaging 4.8 shots on target. The Battery attack, averaging 4.4 shots on target per game, will look to take advantage of Charlotte’s defensive unit allowing 5.2 shots per game.

It’s win or go home for both sides Saturday night in what’s shaping up to be one of the most exciting matchups in the first round of the 2020 Championship Playoffs. Fans can catch the excitement Saturday on the ESPN+ streaming platform.

Follow us
Related Topics:charleston batteryUSL Championship Playoffs
Up Next

Charleston Named #48 on Livability.com’s List of the Top 100 Best Places to Live in the U.S.