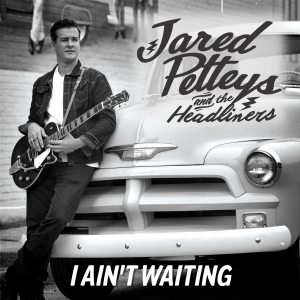 Jared Petteys and The Headliners this week announced the release date for their debut album, I Ain’t Waiting. The forthcoming record comes after a year of touring and writing and is set to be released on September 4th, 2020.

Along with the album announcement, Petteys also released the title track as the first single and video via YouTube. A Record Release Party and Concert is set for November (pending pandemic restrictions).

Petteys recorded all of I Ain’t Waiting in his studio, Retro-Sonic Records in Summerville. He was the songwriter (with a few co-written by Nashville songwriter Daniel Johnson) and sole engineer as well as playing all guitars, vocals, and upright bass. He was joined by his drummer Ron Reisner. The album was produced by Petteys and Reisner, Mastered by Retro Sonic Records, and includes guest musicians Matt Jordan on piano (Reverend Horton Heat) and Paul Croteau on saxophone.

According to Petteys, I Ain’t Waiting is composed of 12 tracks that spans over Rockabilly songs like “Georgia Bound” and Jump Blues such as “Madly In Love” to the crooning sound of “Lonely,” a ballad with a cruising force reminiscent of the duo Robert & Johnny.

“I Ain’t Waiting is a catchy collection of reminders of the heart and soul of American music that inspired the early construction of 50’s Rock ‘n Roll,” Petteys said.

Petteys is a self-taught guitarist and vocalist that picked up guitar by ear at age 8. He began his music career while serving in the Army in Savannah, GA. His act consisted of electric blues heavily influenced by Stevie Ray Vaughan.

He graduated from Dark Horse Institute in Franklin, TN after studying audio engineering and music business to help propel his self-managed career. For the class’s final project, he co-wrote and composed an original song with Nashville songwriter, Daniel Johnson.

Jared Petteys & The Headliners are planning a 2021 National tour with the schedule to be determined.
–