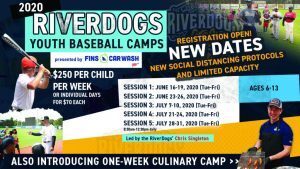 With the start of the 2020 baseball season still delayed, the RiverDogs on Monday announced the expansion of its Youth Summer Camps, along with new restrictions and protocols to keep campers safe in light of COVID-19 precautions.

The team will begin a six-week slate of summer camps on Tuesday, June 16th, with Week 1 of its youth baseball camp, which takes place on the green grass of Joseph P. Riley, Jr. Park.

RiverDogs director of community outreach Chris Singleton and his team will lead five weeks of baseball camp in June and July, and the RiverDogs have added a one-week, limited-time culinary camp in July with chef and VP of food and beverage Josh Shea. Singleton is a former standout outfielder at Goose Creek High School, Charleston Southern University and in the Chicago Cubs’ minor league system.

“We’re thrilled to be launching our 2020 summer camps,” RiverDogs president Dave Echols said. “This has been an abnormal year for everyone, and it’ll be great to see kids on the field at The Joe again before long.”

Both versions of the camp will be different than past years in order to keep campers safe. The baseball camps will be limited to just 40 campers, which will be split into four groups of 10, which will each remain separate from the others. The culinary camp is limited to 15 campers. In addition, new drop-off procedures and counselor interaction guidelines are in place to limit exposure and spread of COVID-19. The RiverDogs’ policies have been adapted from the City of Charleston Recreation Department’s guidelines for its own summer camps.

The baseball camps include stations in hitting, pitching, base running, speed and agility, warm-up and stretching, and fundamentals. The camp takes place in weekly sessions from 8:30 am to 12:30 pm Tuesday-Friday. The camp is open to campers aged 6-13. Weekly registration is $250 per camper; individual day sessions can also be purchased for $70 each.

The new culinary camp taps into the RiverDogs’ strong food and beverage history with Shea, who will conduct the camp out of the Segra Club at Riley Park. The one-week camp will go from 8:30 am to 12:30 pm each day from Monday, July 13th through Friday, July 17th. Each day will start with proper station set-up, include basic cooking skills, and conclude with a new lunch dish, which the campers will dine on. Culinary camp is $300 per camper for the week.

“I’m excited to share my passion for cooking with kids in the Lowcountry,” Shea said. “Our culinary operation at the ballpark goes way beyond hot dogs and soda, and I’m excited to pull back the curtains.”

Registration is now live at RiverDogs.com and RileyParkEvents.com for the following sessions, each running 8:30 am to 12:30 pm:

A direct link to information about all RiverDogs camps can be found at: https://rileyparkevents.com/index.php/events/event/riverdogs-baseball-camp/