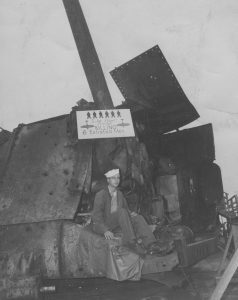 Thursday, April 16th is the 75th anniversary of the Japanese attack on the destroyer USS Laffey that took place while it was operating off the coast of Okinawa during World War II. Thirty-two members of the ship’s crew were killed during the 22-plane attack. Seven bomb-carrying kamikaze aircraft crashed into the vessel and four bombs were dropped on it.

Against all odds, the valiant sailors of the USS Laffey never quit and heroically fought off the attack, shooting down 11 of the Japanese planes. Because of their actions to save the Laffey, the vessel, currently moored at Patriots Point Naval & Maritime Museum, became forever known as the “Ship That Would Not Die.”

Patriots Point’s memorial ceremony and symposium that were scheduled to commemorate the anniversary have been postponed because of restrictions in place due to the coronavirus. The museum will announce a date for the events when those restrictions have been lifted.  Interviews and oral histories that museum staff conducted with Laffey veterans will be published online at www.facebook.com/patriotspoint.org.

In 2018, actor and director Mel Gibson announced plans to make a movie about the attack on the USS Laffey. A release date and filming schedule have not been released, however the movie will be titled Destroyer and is based on the nonfiction book Hell From the Heavens: The Epic Story of the USS Laffey and WWII’s Greatest Kamikaze Attack by John Wukovits.