UPDATE – 3/30/20: This event has been postponed to October 12th. Your ticket will be honored for the rescheduled date. 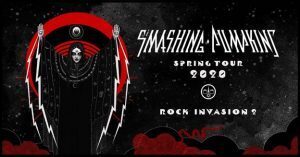 Grammy Award-winning, acclaimed alternative rock band, The Smashing Pumpkins today announced the Rock Invasion 2 tour – a sequel to their iconic 1993 Tour that spanned the globe. The nine-stop tour will include shows at the North Charleston Performing Arts Center on May 5th and the Township Auditorium Columbia on May 6th. Tickets will go on sale to the general public starting Friday, March 6th at 10 am local time.

“It’s been a good while since we’ve played a straight up, bare knuckle rock and roll show; one that avoids little in the way of raw power,” front man Billy Corgan said. “So note: this tour won’t be for those faint of heart, and will certainly echo the dynamic modes in which we built our live reputation.”

According to Live Nation, which will produce the Rock Invasion 2 Tour, the Smashing Pumpkins will play “a heavier rock set of songs spanning the band’s entire catalog.” The tour will feature Billy Corgan, Jimmy Chamberlin, James Iha, and Jeff Schroeder alongside bassist Jack Bates.

Tickets can be purchased at SmashingPumpkins.com and LiveNation.com.

Formed in Chicago in 1988, The Smashing Pumpkins released their heralded debut album Gish in 1991 and found mainstream success with 1993’s 4x multi platinum Siamese Dream and 1995’s 10x multi-platinum Mellon Collie and the Infinite Sadness. With over 30 million albums sold to date, the two-time Grammy, MTV VMA, and American Music Award winning band remains one of the most influential alternative rock bands in the world.
–