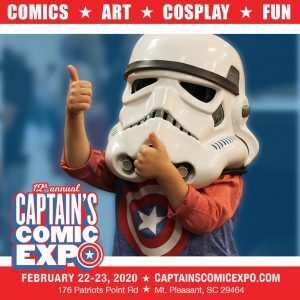 Captain’s Comic Expo returns to Charleston this month to bring the comic-con experience to the Lowcountry. The 12th annual event features over 135 tables of classic and modern comic books, unique toys, amazing artists, and talented cosplay.

The event showcases animators, actors, and comic book artists throughout “Artist Alley.” Artist & author Tracy Yardley (Sonic The Hedgehog) returns to the Expo to sketch and share his experiences as the most credited Sonic creator. Vic Carrabotta (Marvel Tales, Pirates of the Caribean) is one of the oldest living artists to work at Marvel Comics and will be in attendance at the age of 90. The full creative team for Bitter Root, now in development with Legendary Pictures, will be on hand to talk about their supernatural comic book set in the 1920’s Harlem. The Expo will also feature Avengers Endgame’s digital artist for Thanos, Barringer Fox Wingard III, and two gallery artists from Universal Studios in Orlando, FL.

The best comic book and toy dealers in the southeast will bring a variety of classic and hard-to-find collectibles to the Expo. Whether you are looking for a vintage Avengers comic book, rare issues of Batman, or a long-lost childhood Star Wars action figure, the Expo is the place to be! With over 80 tables of vendors, there is something for everyone!

Costumes and cosplay (dressing up and acting as your character) are celebrated at Captain’s Comic Expo. Guests are invited to dress up either Saturday or Sunday (or both) to walk around the floor and interact with other guests. Saturday will feature The Star Wars Experience, a stage full of Stormtroopers, Droids, and other Star Wars characters with full photo backdrops, costumes for kids, and movie-ready costumes. Sunday will feature Cosplay LIVE!, Charleston’s biggest cosplay showcase, in which participants are invited to show off their unique costumes on stage for applause and prizes.

Kids are stars at Captain’s Comic Expo, and there are many special activities for our younger fans. The super hero jump castle returns to help kids make the most of their extra energy. Vendors like Amazing Heroes will have a 16-foot booth of Lego-compatible mini figures. Sunday’s Cosplay LIVE! will have a special kids-only division in which every participant is a winner. Kids 10 and under are FREE to attend the Expo (accompanied with a ticketed adult).

Captain’s Comic Expo is a 2-day comic book and pop culture convention held annually at the Omar Shrine Temple at Patriot’s Point. The Expo takes place on Saturday, February 22nd from 10 am to 6 pm and Sunday, February 23rd from 10 am to 4 pm. Tickets start at $15 for adults and are available at Captain’s Comics and Toys, online at www.captainscomicexpo.com and at the door.

Captain’s Comic Expo is organized and hosted by Mike Campbell and the team from Captain’s Comics and Toys, Charleston’s #1 voted comic book store since 2007.