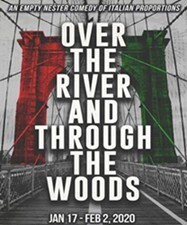 First introduced more than 25 years ago by New Jersey based playwright Joe Dipietro, ‘Over The River and Through the Woods‘ is a situational comedy surrounding two sets of Jersey based Italian grandparents not willing to lose the last remnant of their family to a job on the west coast.

If presented as originally intended ‘Over The River’ is a non stop comedic romp meant to tug at your heart strings. Flowertown Players do a remarkable job of breathing all sorts of life into what will no doubt become a timeless stage production. ‘Over the River’ is just as it is billed, a hilarious family comedy of epic proportions with a running theme, ‘tango familia’ translated in southern slang as ‘I have family’.

Director Sue Vinick assembled six actors who all stand on their own respectively. Each actor fully delves into their respective character. For two hours the audience is totally engaged in the production, whereby the actors are more than presenting a stage play, they are bearing their souls, for a profession they adore. The play reeks with New Jersey Catholic Italian flavor in the nicest way. ‘Over The Woods’ at Flowertown is the way community theatre is supposed to be.

Nick is a nice Italian boy residing in New York City. With his sister living happily in San Diego and his parents taking early retirement to Florida, Nick is left with the religious duty of spending Sunday dinners with both sets grandparents in neighboring Hoboken, New Jersey. All hell breaks loose when Nick announces he’s taking a job in Seattle, leaving his grandparents to stoop to match matching to keep their only grandson firmly planted in the Garden State.

Very seldom do you see a community theatre stage production this spot on. Charleston native Chase Graham is ideal as young Nick, bringing every bit of edgy mania to a character walking a fine line between reaching for his dream and living his grandparents worst nightmare. Fellow low country native Ashley-Ann Woods is precious as the Caitlin, his nana’s canasta partner’s daughter, whom the grandparents hope will become Nick’s love interest and New Jersey anchor. Woods exudes a certain un-measurable confidence.

When you want a Charleston actress to totally engulf herself into a respective role, than there is none better than Susie Hallatt. A veteran of every low country stage, Hallatt portrays Aida with every ounce of grandmotherly Italian flair, much like the Energizer bunny carrying a food tray. Who wants something to eat never sounded so delicious. Truly outstanding performance. Hallatt’s counterpart is equally represented by Fred Hutter, who does a nice job with cantankerous and often befuddled Frank. Together their timing is perfect.

Nick’s other grandparents are well depicted by Larry Wineland as Nunzio and Mary Ann Dyne as his doting wife Emma. Like Hallatt and Hutter, Wineland and Dyne come across on stage as a couple who might have been married 60 years in real life. While Nick (Graham) is the comic nucleus in ‘Over The Woods’, it is his grandparents and all their old school shenanigans that make the play totally endearing. It’s as though you’re witnessing an actual Italian family. Stellar acting praises all around for channeling true Italian personas. The dining room table scenes are priceless. 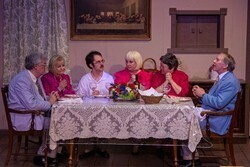 Double kudos to Vinick and James Dyne for creating a very welcoming set, easily reflecting Frank and Aida’s living room and dining area. The plastic covered sofa provides a familiar throw back to another era, and the revolving front porch stoop slash entry way is not only highly effective, but a nice way to transition scenes. Food, faith, and family may drive the stage play, but it is the combined efforts of all the Flowertown Players crew, including lighting and music that complete the overall experience.

Whether you’re Italian or come from a family steeped in heritage ‘Over The Woods & Through The Woods’ will make you laugh and maybe get a little ‘verklempt’ aka a Yiddish term for emotional. If you love a good stage play full of funny and family drama than I recommend this play wholeheartedly. Hurry though, performances run through Feb 2nd at the James F. Dean Theatre in Summerville. ‘Tango famiia!‘