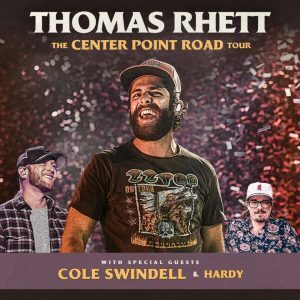 Country singer and songwriter Thomas Rhett will bring “The Center Point Road Tour” to the Volvo Car Stadium on Thursday, June 18th. He’ll be joined on stage by Cole Swindell and Hardy.

Rhett has released four studio albums, three of which went Platinum or better. Those records produced thirteen songs that reached No. 1 on the Billboard Country Airplay chart including “Die a Happy Man,” “Marry Me,” and “It Goes Like This.”

Eleven-time No. 1 hit rising superstar Cole Swindell will also be performing at the North Charleston Performing Arts Center on April 16th, 2020. Hardy will be part of that show as well.