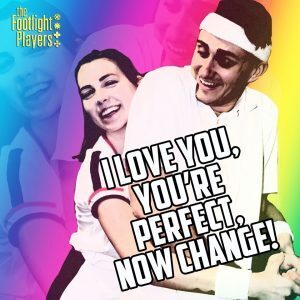 The second-longest running Off-Broadway musical of all time, I Love You, You’re Perfect, Now Change (ILYYPNC) makes its way to the Queen Street Playhouse as the fourth show in Footlight Players’ milestone 88th season of bringing live theatre to the people of Charleston and the Lowcountry.

Best described as a ‘sitcom set to music’ ILYYPNC, its made for social media acronym, made its Off-Broadway debut in 1996 prior to the dawn of the social media age. The popular and often produced show has been translated into over 17 languages with long-running productions from Los Angeles and Dubai to Dublin and Buenos Aires. In 2018 the show received a much needed update with more modern references and pop culture touchstones thrown in to reflect the current climate of dating in the social media age along with more varieties of couplings and romantic situations.

Directed by local actor/comedian Nathan Soutar in his directing debut, this production of ILYYPNC features six actors taking on a multitude of roles in sketches that run the gamut of relationships from incredibly awkward blind dates, A Stud and A Babe, to couples learning the ropes of parenthood The Baby Song and The Marriage Tango and even falling in love in the golden years of life, I Can Live With That.

This production features a lineup of familiar Footlight faces including real-life engaged couple Rebecca Weatherby and Michael Okas (Head Over Heels) as well as current Charleston City Paper Best Actress winner Madelyn Knight (Head Over Heels). Rounding out the cast are three performers who are widely recognized for their improv work at Theatre 99 including Lee Lewis, Madison Moss and director Soutar. All six take on a variety of hilarious and often touching characters in what is certain to a perfect date night show as we head into the Valentine’s season this February.

The Reckoning in the Park Returns March 8th