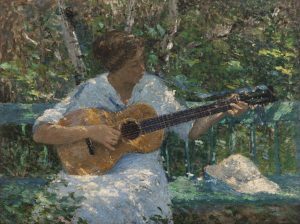 The Gibbes Museum of Art recently announced another female focused event, this one honoring the 100th anniversary of the 19th Amendment. This February, the Gibbes will host a literary program inspired by their special exhibition of Central to Their Lives: Southern Women Artists in the Johnson Collection.

The program, titled “She Persisted: Women of Letters and the American South,” is a discussion about the literary traditions and social landscape that gave rise to voices like Eudora Welty, Zora Neale Hurston and Harper Lee, and that continue to inspire women writers and artists across the south. It will take place on February 19th at 6 pm in the museum.

Speakers include Professor and Director of Southern Studies at the College of Charleston, Julia Eichelberger; recipient of the National Book Award for Poetry, Nikky Finney; and author of the Charleston-based novel The Cigar Factory, Michele Moore.

This event is held in partnership with Itinerant Literate Books, which opened in 2015 as a mobile and pop-up bookstore, and in 2018 opened the flagship bricks-and-mortar Bookstop in Park Circle.