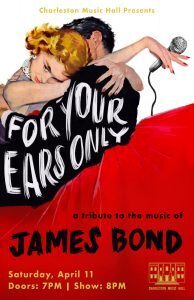 The Charleston Music Hall is once again partnering with local musician and singer Lindsay Holler for their latest event, “For Your Ears Only: A Tribute to the Music of James Bond,” on Saturday, April 11th at 8 pm.

Holler has put together a diverse band that will be playing 17 James Bond Intro songs from Dr. No (1962) to Skyfall (2012) while the venue will be projecting the Bond videos for the intros during each song to create an immersive Bond Experience.

The band will consist of:

& more to be announced soon

& more to be announced soon

Follow us
Related Topics:charleston music halllindsay holler
Up Next