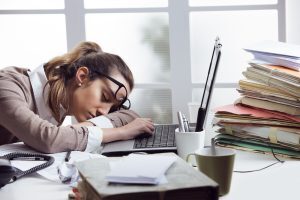 There are so many risks associated with being overly fatigued. For example, we often hear about serious accidents thought to be linked to drowsy driving. Driving a vehicle when fatigued is extremely dangerous and can be as bad as driving while under the influence of a substance.

According to the National Highway Traffic Safety Administration, drowsy driving is believed to be the cause of at least 100,000 crashes each year.

Beyond that, being overly tired can put you at risk of being involved in a workplace accident, and it can have long-lasting effects on your health.

Chronic sleep deprivation is linked to cardiovascular disease, obesity, and depression among other serious health issues.

There are also different types of fatigue someone may experience. One is physical, and this often involves muscle weakness. The other is mental fatigue. Mental fatigue means it’s challenging for you to focus and you may suffer from brain fog. Both can occur together as well.

So what exactly causes Americans to be so tired?

While being fatigued at work can be risky, some of the reasons Americans feel fatigued are actually because of work.

For example, shift work is a big reason people feel fatigued. When you work night shifts, it changes your body’s natural circadian rhythm, and it can make it hard to get enough rest.

If you work long or irregular hours or have a stressful work environment it can also increase fatigue, as can working a repetitive job, working alone, or working in a position where you have to concentrate for long periods of time.

Workplace stress can contribute to fatigue, including conflict, bullying, and concerns over job security.

Sometimes people who work hard and neglect other areas of their life will experience burnout, and that can also lead to fatigue.

Truck drivers are an example of people who typically deal with fatigue because of their work. They work irregular schedules, and sometimes they have to work into the night with inconsistency in their sleep schedule.

Many medications can contribute to fatigue. Over-the-counter medicines can cause fatigue such as antihistamines and allergy medications, but prescription drugs do as well, and often these are the medicines people need to take on a daily basis to manage certain health conditions.

Some types of medicines that contribute to fatigue and also are commonly used include:

Technology can make our lives easier and more entertaining as well, but there’s a term called tech fatigue that may be affecting you more than you realize.

Tech fatigue is a broad term used to describe not just the way technology makes us feel tired but also stressed and even depressed.

Research shows that heavy cell phone use can be linked to increased sleep disorders and increased depressive symptoms.

If you are constantly accessible via your cell phone, you may be more likely to say you have mental health issues, and men who intensively use computers are more likely to develop sleep problems.

Consistent, late-night use of a computer is associated with stress, sleep disorders, and symptoms of depression in both men and women.

With the constant use of technology, we’re all connected at all times to the outside world, our jobs and what’s happening at any given time whether it’s in terms of our social connections or current events.

Even just the light emitted from the screens that we use can contribute to fatigue. For example, the light from our phone screen can affect our production of melatonin which can, in turn, disrupt our circadian rhythm.

Sometimes even without a diagnosable condition, having poor health habits can contribute to fatigue.

For example, not having a healthy diet can contribute to fatigue, as can dehydration and not getting regular exercise.

Adults should typically aim for at least seven to eight hours of restful sleep to get the full benefits and to feel less fatigued during the day.

If you aren’t able to do that, you might want to speak with your doctor to rule out any underlying health conditions. Once you do that, you can start working on lifestyle changes to help you feel less fatigued and more productive during the day.

For example, maybe you work on your diet and how much activity you get each day, or perhaps you set a rule that you disconnect from all screens at least an hour before you’d like to fall asleep.

Make it a goal in 2020 to have better sleep habits to improve your health holistically and your quality of life.

A Quick Glance at HolyMolyCasinos