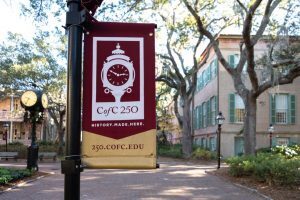 The College of Charleston will celebrate its 250th anniversary in 2020 with a yearlong schedule of events and projects aimed at highlighting the university’s storied and complex history while also looking ahead to its bright future under the leadership of a new president.

The College, whose founding in 1770 predates the United States of America, is planning a wide range of campus and community events, research projects, fundraising drives, student-focused activities and more.

A few of the highlights include:

For more information on events, merchandise and projects, visit the anniversary website at 250.cofc.edu.

President Andrew T. Hsu, who took the reins of the College as its 23rd president in May 2019, says the anniversary is an opportunity to look back at past achievements while also planning for the future. The College will unveil and begin implementing a new strategic plan during the anniversary year, and Hsu says the plan will focus on raising the school’s national and international profile; creating more in-demand academic programs; elevating efforts to support, retain and graduate more students; and continuing to diversify the campus community.

“We will celebrate the past 250 years of our university’s accomplishments by focusing on retaining our best and strongest traditions while envisioning the transformation of our College in the next 250 years,” Hsu says. “We plan to use this anniversary as a way to involve more alumni and community leaders in the important efforts that will define the College of Charleston’s future.”

While the festivities will include plenty of fanfare, Hsu says the anniversary will also be a time of reflection and reconciliation as the university seeks to acknowledge its full history. From the use of enslaved labor to construct iconic Randolph Hall in the late 1820s to the school’s efforts to avoid racial integration by going private in 1949, the College’s history includes periods of “both great pride and great pain,” Hsu says.

The College has been planning for the anniversary for nearly two years. In addition to designing an anniversary website and creating a special board of directors, anniversary project director Cande Cook says the school also established seven committees consisting of faculty, staff and students to generate and implement events and projects around the anniversary’s theme: “History.Made.Here.”

“The various committees represent a diverse cross-section of our campus community, and members have come up with many excellent ideas that will make it possible for everyone to engage with this celebration in some way,” says Cook.

While the anniversary celebration began in earnest this fall at the College’s annual Alumni Awards Gala, the public launch will take place on Jan. 30, 2020, which will mark the passage of 250 years since Jan. 30, 1770, when South Carolina Lt. Gov. William Bull recommended to the colony’s General Assembly the establishment of a college in Charleston. The American Revolution and political hurdles delayed the College’s chartering until 1785, and the first classes were not held until 1790.

Still, the College’s founding date, which makes it the 13th oldest university in the nation and the oldest educational institution south of Virginia, has always been a point of pride. With three signers of the Declaration of Independence and three signers of the U.S. Constitution among its founders, the College’s history is intertwined with the histories of the City of Charleston, the state of South Carolina and the nation. The College’s 250th anniversary also coincides with the 350th anniversary of the City of Charleston, which supported the College’s operation from 1837 until 1949, making the school the nation’s first municipal college.

CARTA, Affordabike Partner to Give Away 20 Refurbished Lost-and-found Bikes

Where to Splurge and Where to Save on a Special Event