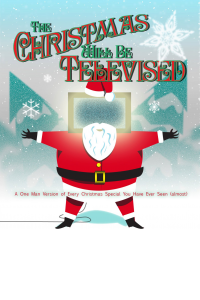 After 10 years of performances, comedian Andy Livengood is retiring The Christmas Will Be Televised, his award-winning, one-man show. The final performances will be held at Theatre 99 on December 12th at 8 pm and December 21st at 10 pm.

In the show, Andy is at his parents’ annual Christmas party, and there’s only one way Andy is going to make it through this shindig with his sanity intact; he’s gonna binge some Christmas specials. He has watched every Christmas special so many times he knows them by heart, and he’ll break them down for you in a hilarious, fast paced whirlwind tour of holiday pop culture.

Audiences will get to see Dr. Seuss as a rapper, a lightning fast take on A Christmas Story and the Star Wars/Christmas Carol mashup you never knew you needed.

Along with Christmas themed sketches, the show also deals with how holiday traditions and family evolve and change once you move into adulthood. The show balances the nostalgia of childhood with the cynicism of being an adult.

After ten years of sold out shows up and down the east coast, Livengood says he’s ready to retire the show.

“It’s bittersweet,” Livengood said. “I’m extremely proud of this show, but ten years is a good run. I’m really excited to give this show the sendoff it deserves.”

Tickets are $10 and can be purchased at Theatre99.com.