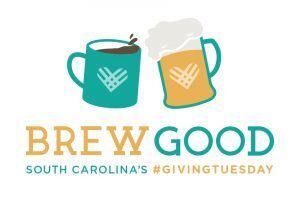 As part of South Carolina’s first ever statewide “#GivingTuesday” initiative, a group of breweries and coffee shops will show their support with “#BrewGoodSC,” on Tuesday, December 3rd.

Started in 2012, “#GivingTuesday” is a global day of giving that harnesses the collective power of individuals, communities, and organizations to encourage giving and to celebrate generosity worldwide. In just seven years, “#GivingTuesday” has become a worldwide movement, with over sixty countries now participating and mobilizing giving back and changing communities. The goal is to create a massive wave of generosity that lasts well beyond that day, and touches every person on the planet. In just seven years, the movement has raised more than $1 billion online in the U.S. alone.

Over 60 South Carolina nonprofits are joining together and using “#BrewGoodSC” to say thank you and engage their donors and supporters in acts of generosity. Many more will offer individual “#GivingTuesday” fundraising campaigns.

Eleven locally-owned coffee shops and breweries have signed up to host these gatherings, many offering up specials as a thank you to participants. Community members are invited to stop by and engage in “do good” activities like toy drives, raffles, writing thank you notes, volunteering, providing in-kind donations, and pledging to make 2020 their year to give back – all while enjoying locally brewed coffee and beer. Balloons, stickers, coloring and board games will engage children to build upon “#GivingTuesday’s” recently launched “GivingTuesdayKids.”

In addition, many nonprofits will assist folks in sharing their #MyGivingStory, hoping that South Carolinians will be well represented in this national campaign funded by the Gates Foundation. Of the nearly 2,000 stories or videos shared thus far, only 35 have been from South Carolina