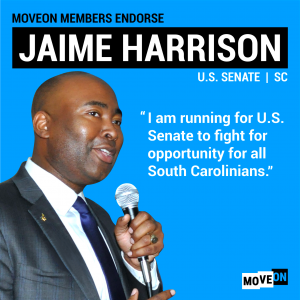 MoveOn Political Action last week announced that its members in South Carolina have voted to overwhelmingly endorse Jamie Harrison for US Senate in 2020, with 96% of votes in favor of Harrison.

Harrison is challenging one of President Trump’s biggest advocates: Republican incumbent Lindsey Graham. MoveOn’s more than 45,000 members in South Carolina will organize and mobilize over the coming year to elect Harrison.

As son of a single teenage mom, and raised by his grandparents in Orangeburg, South Carolina, Harrison overcame the challenges of grinding poverty with the help of teachers and mentors who believed in him. From a mobile home to Yale University and Georgetown Law, he never forgot who he was or where he came from.

“MoveOn is proud to endorse Jamie Harrison for U.S. Senate,” Rahna Epting, Executive Director of MoveOn said. “Jamie Harrison is a dedicated public servant who is not just ready to fight for the people of South Carolina, he is ready to take on Donald Trump’s star enabler—Senator Lindsey Graham—who appears to care more about impressing Trump than he does about protecting the Constitution, our Democracy, or the people of South Carolina. Jamie has a positive and progressive vision for our country and his fearlessness is galvanizing the public in South Carolina and throughout the country.”