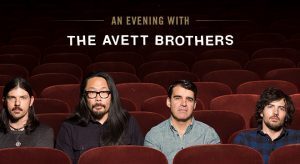 Folk rockers The Avett Brothers will perform at the North Charleston Coliseum on April 3rd, 2020 at 7:30 pm.

The band released its tenth studio album, Closer Than Together, on October 4th. The release reached No. 2 on Billboard’s US Folk Albums chart, which is the group’s fifth straight studio album to reach No. 1 or No. 2 on that chart.

Follow us
Related Topics:north charleston coliseumThe Avett Brothers
Up Next