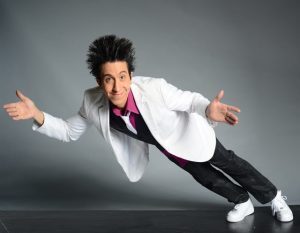 Mattioli will be performing the adults only evening shows on Oct. 18th and 19th starting at 7:30 pm and the family matinees on Oct. 19th and 20th at 1 pm.

At 18 years old, he was hailed by the International Brotherhood of Magicians as a “Champion of Magic,” becoming one of the youngest magicians to ever receive this honor. Then in 2006, Jay was awarded 1st Prize at the Society of American Magicians International Stage Contest of Magic. Jay is one of only a few magicians in history to receive 1st prize in both of these international magic competitions.

More recently, Jay electrified the nation and stunned the judges with his appearance on NBC’s hit show America’s Got Talent and Showtime at the Apollo.

Considered by his peers as a magic innovator, Jay creates many of his signature magic effects from the ground up. Everything from building props, costumes, music composition, and choreography. He performs magic with everything from live animals to levitating microphones, as well as startling effects where Jay vaporizes his body in the blink of an eye.

Holy City Magic features magic, comedy, and variety shows. Adults only evening shows will start with a cocktail hour where magicians will entertain guests with close-up magic at the bar followed by an hour and a half stage performance, while matinees will be one-hour family friendly shows.

For more information, visit www.HolyCityMagic.com. Tickets are on sale now.

“Thirty Dancing, The Time of My Life Gala” to Benefit Camp Happy Days