What If Productions Open 10th Season With Rip Roaring Comedy 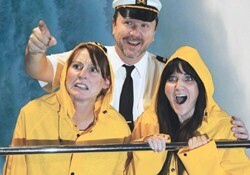 While newlyweds and trailer park denizens imagine Niagara Falls as a utopian destination, full of wedded new beginnings, great memories, and a rush of watery expanse, only from the twisted mind of Pulitzer Prize winning playwright David Lindsay-Abaire comes an stage play that presents a total 180. ‘Wonder of the World’ is a total whimsical farce surrounding two women trekking to Niagara Falls for different reasons. One searching for the meaning of life, and one looking to check out of life.

Kicking off their 10th anniversary, the cast and crew with What If Productions under the direction of Erin Wilson, offer up two fun filled hours of jocularity as they bring Lindsay-Abaire’s absurd stage comedy to life at the Queen Street Playhouse. ‘Wonder of the World’ is a full tilt romp overflowing with misguided strangers, a wayward boat captain, a pair of oddball detectives, a round on ‘The Newlywed Game’, and a villainous assembly of onlookers all played by one cast member. It’s a crazy thrill ride and a barrel of laughs.

Veteran Charleston thespian Beth Curley is charming as Cass, a misplaced wife eagerly hoping to find solace in the roaring rush of the waters. Spurned by her husband’s bizarre sexual fetish, Cass journeys to the honeymoon capital with a long bucket list, that includes her own masked infidelity, as well as a catalog of once in a lifetime experiences. Curley is superb and invokes all the unbridled wonderment and perkiness Cass requires.

Curley’s female counterpart Tara Denton is equally delicious as Lois, a frantic female whose alcoholic demons have gotten the best of her, ultimately causing the demise of her marriage. Denton paces back and forth with frenzied energy. Kyle Barnette provides a bit of underlying serenity amidst all the chaos. He portrays Captain Mike as the laid back, cool as a cucumber tour boat captain, continuing to ride the thunderous waves as a way to cope with his own loss. Barnette adds the subtle humor we’ve come to expect from acting skills. He and the two central females feed off each other.

The clandestine and hideous duo Karla and Glen are admirably and dastardly depicted by Amanda Daniels and Jim Flannery. The twosome portray a pair of demented, as well as inept detectives hell bent on cracking their very first case. Erik Brower is ideally cast as Cass’ husband Kip, a disturbed young man who can’t quite come to grips with his wife’s decision making, and wondering why seafood jello, waffle irons, and photo albums won’t save their marriage. His 30 second role reversal where he transforms into a ‘butch husband’ is hilarious.

While every actor in this deranged escapade is perfectly placed, no one is more committed to their role, or roles than Madelyn Knight. She moves on and off stage with comic precision depicting a whirlwind of characters, delightfully portraying three different waitresses in one very fast paced scene. She changes costumes quicker than Cher in a Las Vegas act. Knight ups her game near the end as the unlicensed, out on parole, family therapist dressed as a flamboyant clown. She brings the funny!

The ensemble cast work off each other akin to a long running situation comedy. Their comic timing is never more on display, than during the hotel scene where they’re all participating in the ‘Newlywed Game’ emceed by the aforementioned Niagara Falls court jester. Together they provide a parade of laughs that will keep audiences chuckling for over two hours. Comedy this outrageous only occurs when all the actors are totally committed to the stage presentation.

‘Wonder of the World’ is a non-stop madcap masquerade akin to ‘Thelma & Louise 2 : On Summer Vacation’. What If Productions do justice to the original stage play. As their website suggests, the play is a full throttle caper that just might take you over the waters edge. If you love to laugh, need a comic pick me up, or just want give your jawbone an extensive work out, than I would catch a performance before it ends this weekend at Queen Street Playhouse.

Sebastian Maniscalco Coming to the North Charleston PAC in 2020