Cast & Crew Totally Immerse Themselves In This Effervescent Stage Production 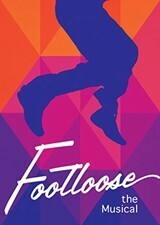 Charleston Stage Company open their 42nd season by taking audiences back 35 years, as they revisit one of the most memorable movies to come out of the 1980’s. Over two dozen super charged cast members sing and dance for over two hours, as Charleston Stage present a high energy version of ‘Footloose the Musical’.

Based on the 1984 Kevin Bacon movie of the same name, the musical adapted for the stage in 1998 reflects the same premise as the film with several variations. Big city teenage kid (Ren) moves to small town USA harboring angst, after his father abandons he and his mother. An outsider with a chip on his shoulder, Ren tries desperately to fit in, eventually hoping to overturn an antiquated law that prohibits dancing in the town. A fight that will pit him against the town’s pastor, who is coincidentally the father of Ren’s love interest.

Given the popularity of the original film and the soundtrack it was only a matter of time that a stage production would evolve, however given its intensity, the musical had to be somewhat altered and new music incorporated. Not to worry, the title track including five of the films original Top 40 songs are among the 19 numbers. What would ‘Footloose’ be without ‘Holding Out For A Hero’, ‘Heaven Help Me’, and ‘Almost Paradise’.

The actors under the adept direction of Marybeth Clark with Charleston Stage, give full and heartfelt representation to the musical, offering theatre goers a delightful two hour journey to yesteryear. With the title track one of the most recognizable songs in pop music, I recall many in the audience singing along, while many more kicked off their Sunday shoes and got swept up in the excitement only ‘Footloose the Musical’ can provide.

While the cast is extensive I will note a few exceptions. New Jersey native Justin Gaskill is ideally cast as Ren, displaying the town’s misfit with equal measures of apprehension and uncertainty. Gaskill softens the character over the course of the production. His teenage counterpart is justly portrayed by resident actor Mary Kate Foley, who steps in the cowgirl boots of the pastor’s daughter Ariel. Foley does a nice of depicting Ariel as both ‘good girl, bad girl’, ultimately trying to win the approval of her father.

Aaron Andrews adds another gold star in his Charleston acting resume as he totally engulfs himself in the role of Reverend Moore, the town’s spiritual leader and moralist. Andrews mirrors John Lithgow’s 1984 representation, playing the God fearing man as the holier than thou type eagerly hoping to reconnect with his daughter. Rylee Coppel fits nicely as Vi, a loving and dutiful pastor’s wife trying to a sounding board for her husband and Ariel. Excellent pairing by Charleston Stage Co.

A big shout out to returning Charleston Stage resident thespian Colin Waters who steals many of the musicals enchanting scenes. Waters is absolutely delightful as Willard the town’s original misfit, depicting him as an oversized lovable teddy bear, a friend who has your back, but not necessarily the moves or words to woo his longtime gal pal.

The entire cast and crew knock this production out of the ball park. Any stage production in the low country with Samile Basler in the cast is earmarked for success. In a small role Basler brings a whole lot of spark to Betty, owner of the local burger joint. Seasoned actress and award winning author Liz Duren adds beautifully to the main cast, playing Ren’s reassuring mother Ethel McCormack.

Choreography (Cara Dolan) and 1980’s costuming (Haley Francisco) are superb. A lone backdrop, (thanks to Cody Rutledge) illustrating telephone poles and a windmill is easily lowered from overhead to allow cast and crew to assemble upcoming scenes inside the church, town hall, railroad crossings, the Burger Blast, and the high school. Smooth transitions throughout.

‘Footloose the Musical’ is whimsical, high energy, and a two hour thrill ride. Charleston Stage Company have a rip roaring hit on their hands. The original music is timeless as is the movie, and now the musical carries on that tradition. The key for the musical is to cast actors committed to their roles, and to having as much fun as the audience. Mission accomplished. Weekend performances run through Sept. 22nd at historic Dock Street Theatre.