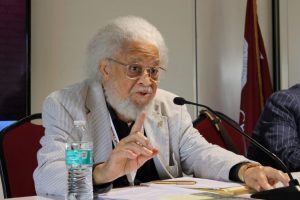 A testament to the Race and Social Justice Initiative’s (RSJI) commitment to promote student development, the Student Leadership Award (SLA) is a $6,000 travel and research stipend divided among 10 student-leaders who recognize the importance of social justice activism. Inspired by the findings of the The State of Racial Disparities in Charleston County, South Carolina 2000–2015, a study conducted and published by RSJI, the SLA funds students who are actively finding solutions for the pervasiveness of racial inequality and injustice within the Lowcountry, the South and the country at large.

James E. Campbell (born 1925), an African American educator and civil rights activist, worked as a teacher in Baltimore, Maryland; New York, New York; and Tanzania. He later became an administrator with the New York City public school system. Campbell also served as contributing editor for the journal Freedomways. Relocating after retirement, he became a community activist in Charleston, South Carolina, and continued his involvement with educational initiatives. Throughout his life, Campbell has worked with organizations focused on socialism, Pan-Africanism, freedom struggles and equity in education. In dedicating the SLA in Campbell’s name, RSJI leaders hope his lifelong commitment to civil rights will inspire future agents of change.

Previously awarded to undergraduate and graduate students at the College of Charleston, the RSJI is expanding the SLA’s reach for the 2019–2020 awards cycle. Thanks to a generous donation from an anonymous donor, RSJI will be inviting students from South Carolina’s six historically black colleges and universities (Claflin University in Orangeburg, South Carolina State University in Orangeburg, Benedict College in Columbia, Allen University in Columbia, Voorhees College in Denmark, and Morris College in Sumter) to apply. By expanding the SLA’s eligibility requirements, RSJI hopes to recognize and promote the next generation of social justice activists, whether they be found on the College of Charleston campus or on the campus of a neighboring institution of higher learning.

In response to the shooting death of Walter Scott by a police officer in April 2015 and the mass shooting at Emanuel A.M.E. Church in June 2015, the RRSJI was established by the Avery Research Center, the Marlene and Nathan Addlestone Library, the African American Studies Program and the Lowcountry Digital History Initiative at the College of Charleston with a major grant from Google. With this support, RSJI is working with numerous partners to facilitate public events, exhibitions and various projects to promote awareness of the history and ongoing struggles of racial injustice in Charleston, South Carolina, and throughout the United States.

Follow us
Related Topics:college of charlestonCollege of Charleston’s Race and Social Justice InitiativeJames E. CampbellThe Avery Research Center
Up Next