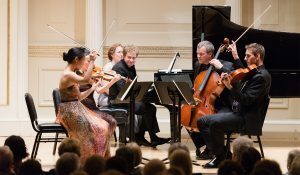 Chamber Music Charleston (CMC) opens the 2019-2020 season on September 15th with a series of house concerts in Downtown Charleston, Kiawah Island and Seabrook Island. Once the music begins, the season continues with an array of performances in familiar venues such as the Dock Street Theatre and the Charleston Museum Auditorium in addition to debut performances at Drayton Hall and South Carolina Society Hall. An exciting roster of guest musicians from around the globe will join the local performers of CMC, culminating in a performance by legendary violinist Midori in March 2020.

Regarded as one of the most historic and beautiful buildings in the nation, South Carolina Society Hall has become the home of Chamber Music Charleston’s newest concert series. The “Salon Series” harkens back to the 18th and 19th century European Salons, social gatherings filled with music, literature and art. Our series opens with violinists Jenny Weiss and Lydia Chernicoff, violist Ben Weiss, cellist Timothy O’Malley, bassist Jean Williams and bassoonist Sandra Nikolajevs bringing to life a program of music inspired by autumn. The delightful Sunday afternoon concerts will be followed by a reception including specially crafted punch, tea sandwiches and sweets.

A brand new collaboration will bring musicians of Chamber Music Charleston to the McDaniel Pavilion on the grounds of Drayton Hall to offers guests a new opportunity to see one of Charleston’s premiere musical institutions perform at one of Charleston’s most important historic estates.

On Tuesday, March 24, 2020 Chamber Music Charleston presents legendary concert violinist Midori in a solo recital at St. Matthew’s Lutheran Church. We invite you to join us for this extraordinary opportunity to hear one of the biggest names in classical music perform in Charleston. The concert will be followed by an exclusive post-concert reception where guests will have the opportunity to meet Midori in the elegant Colonial Ballroom of the Francis Marion Hotel, just steps away from the church.

At the conclusion of the season, in May 2020, musicians of Chamber Music Charleston will return to the Musica en Segura Festival as special guest artists in residence.

The 2019-2020 season marks CMC’s Thirteenth year presenting exceptional chamber music throughout Charleston and the Lowcountry. Tickets and more information about individual concerts are available online at chambermusiccharleston.org or by calling 843-763-4941.

An Evening with Midori:

Saturday, November 9th is going to be a magical evening of music in Drayton Hall’s beautiful McDaniel Pavilion! Join us from 6 to 8 pm for a performance by Chamber Music Charleston accompanied by a light reception. Chamber Music Charleston will present “A Little Night Music,” an hour long program of music for flute and string quartet which will include Mozart’s “Eine Kleine Nachtmusik” and Arthur Foote’s’ “A Little Night Piece”. Drayton Hall – a Charleston, SC plantation house museum – is the oldest Palladian home in North America c.1738 and the oldest unrestored plantation home open to the public in the United States. Set on 125 acres next to Charleston’s scenic Ashley River, attending an event on the estate offers guests a new opportunity to see one of Charleston’s premiere musical institutions perform at one of Charleston’s most important historic estates. Not to be missed.

Intimate performances of chamber music in some of the most distinctive homes of Downtown Charleston, Kiawah Island, Seabrook Island and Bishop Gadsden. Each hour long performance is followed by a light wine and cheese reception, providing the opportunity to meet the performing musicians and fellow audience members. CMC presents over 25 House Concerts throughout the season. Please visit chambermusiccharleston.org for the schedule.

Chamber Music Charleston (CMC) was founded in 2006 to enhance the quality of life in the Greater Charleston area through the performance, cultivation and promotion of classical chamber music of high artistic quality by musicians of the Lowcountry.

CMC began with a 5-member advisory board and 13 core musicians who performed throughout the initial season, presenting 15 concerts. The majority of the performances were “House Concerts,” intimate evenings of chamber music in private homes of downtown Charleston and Kiawah Island.

Over the years CMC began presenting more concerts to meet the demand for their unique, informative, engaging presentations. During the first five years the organization added performances in churches, schools and art galleries in addition to special performances for the Piccolo Spoleto Festival, Happy New Year Charleston, MOJA Festival and North Charleston Arts Festival. In 2010 CMC launched the first Mozart in the South Festival including the Little Mozart Circus; in 2011 the ambitions Ovation Concert Series started, with performances at Memminger Auditorium, Sottile Theatre and most recently the Dock Street Theatre; in May 2013 CMC made their New York City Debut Performance at the historic Carnegie Hall, with a return performance in May 2017. In its most recent season, CMC gave 65 performances and entertained over 7,780 audience members.

Local Art Photographer to Host “Growth Begins with the HeART”