Connect with us
Press Release
– 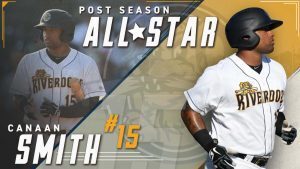 The South Atlantic League on Tuesday announced that RiverDogs left fielder Canaan Smith has been named a South Atlantic League Postseason All-Star in a vote of the league’s coaches, general managers, and media members.
The Rockwall, Texas product has had a historic season in the Lowcountry, entering the final eight games of the year with a .305 batting average that ranks third in the league, an on-base percentage that ranks T-2nd (.404) and an overall OPS mark of .863 that places him third among all qualifying hitters in the circuit. Highlighted as one of the top 11 position players in the league and the top vote-getter at left field, he is the third RiverDog in the past four seasons elected to the Postseason All-Star team.
“We are all extremely proud of Canaan. I think it is well-deserved for him to earn this prize,” said RiverDogs manager Julio Mosquera. “I think if you look at the numbers and all the things we talk about these days from a complete hitter, you’re talking about walks, you’re talking about on-base percentage, you’re talking about hard-hit balls and quality of the at-bats, and the way he goes out there and plays his game at The Joe that plays a little bit tougher than other ballparks, he’s been deserving and he’s played tremendously the whole season.”
Among the league’s 2019 selections, Asheville’s Terrin Vavra was named the SAL Most Valuable Player, becoming the fourth Tourist in the last seven seasons to garner the award. Augusta lefty Seth Corry was tabbed the league’s Most Outstanding Pitcher and Delmarva righty Grayson Rodriguez the Single-A circuit’s Most Outstanding Major League Prospect. Shorebirds skipper Kyle Moore was named the Manager of the Year after guiding Delmarva to over 80 wins on the campaign.
With 10 home runs and 12 stolen bases on the year, as long as Smith maintains an average over .300 for the remainder of the season, he will be just the sixth player in Charleston’s history as a South Atlantic League franchise (circa 1980) to hit over .300 while adding double-digit homers and stolen bases, joining an illustrious list that includes Tyler Austin (2012), Delmon Young (2004), Josh Hamilton (2000), Fernando Tatis (1995), and former SAL batting title winner Cliff Pastornicky (1982). Heading down the final week of the season, Smith is the only of the exclusive list to have walked 70 times; only Tyler Austin also maintained an on-base percentage over .400.
Originally a fourth-round selection by the Yankees out of Rockwall-Heath High School in 2017, the lefty bat has shown a tremendous turnaround in his third year as a pro. With Staten Island in 2018, he hit a career-low .194 with five home runs in 64 games in the New-York Penn League. After failing to crack Charleston’s Opening Day roster at the onset of 2019, he would be called up as an injury replacement for Isaiah Pasteur just a week into the season. After a tentative 0-for-10 start, he established himself as a regular in the lineup, slowly climbing his way up Julio Mosquera’s batting order and finished the year as the premier hitter in the three-hole.
Smith’s most impressive stretch of the season started in mid-July, when he went a blistering 25-for-50 over a 15-game stretch from July 18-August 3, a span in which he ranked second in Minor League Baseball with an astounding .609 OBP. He has cut his strikeout-rate 10 percentage points down from a career-worst mark at 30 percent last year and leads the South Atlantic League with 70 walks drawn on the season. At the season’s midpoint, he was named the Southern Division starter at left field as one of Charleston’s six All-Star selections.
Smith and the RiverDogs finish up their final road trip of the season on Thursday night in Asheville before returning home to close out the year over the four-day, Labor Day holiday weekend starting Friday night. The RiverDogs will host their final Boeing Red Shirt Friday featuring the final fireworks show of the season and will honor the fans’ choice for the “Top Dog” of the season at the final game of the season on Monday.
Fans can “Make Fun” with the RiverDogs all season long down at The Joe. Single-game tickets, including options to the Riley Park Club, are now available at riverdogs.com/tickets or by contacting the RiverDogs front office at 843-577-3647 (DOGS). A full schedule and list of game times for the 2019 season are available at riverdogs.com.
RiverDogs Postseason All-Stars since 1997
2017: OF Estevan Florial*
2016: DH Chris Gittens
2010: IF Robert Lyerly
2009: P David Phelps, OF Melky Mesa, IF Corban Joseph
2008: C Jesus Montero
2007: IF Mitch Hilligoss
2006: 1B Ben Jones
2004: OF Delmon Young*, C Colt Simmons
2003: IF B.J. Upton*
2000: OF Josh Hamilton
1998: C Toby Hall
1997: OF Alex Sanchez
*Also Named SAL’s “Most Outstanding Major League Prospect”