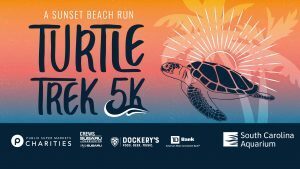 The South Carolina Aquarium invites runners and walkers of all ages and abilities to sign up for a scenic sunset 5K on the beach with its annual Turtle Trek 5K on September 21st.

The annual 5K takes place on the sands of Isle of Palms and raises money for the Aquarium’s Sea Turtle Care Center and other conservation initiatives. South Carolina Aquarium houses the only sea turtle hospital in the Palmetto State and has rehabilitated and released a total of 281 sea turtles back into their natural habitats since opening in 2000.

“Turtle Trek is one of our favorite events of the year here at the Aquarium,” Stephanie Gabosch, strategic partnerships officer, said. “It has sold out every year that we’ve put the race on and we expect that it will sell out well ahead of the actual event again this year.”

The festivities begin at 4:30 pm with a beach sweep and warm-up. Beach debris such as cigarette butts and plastic left behind from humans get swept into the ocean and digested by sea turtles as well as other animals and birds. So far, a total of 230,764 pieces of debris have been entered into South Carolina Aquarium’s Litter-Free Journal, a digital app that allows citizens to help the Aquarium track litter, in 2019.

A Kids Fun Run at 5:30 pm precedes the 5K run at 6 pm. Following the race, runners, and supporters are invited to attend an after party at The Windjammer for food, prizes, and live music from Moxie.

Sign up now at scaquarium.org/turtletrek – spaces are limited and the event is expected to sell out.