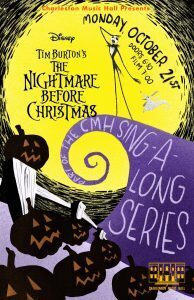 The Charleston Music Hall is screening The Nightmare Before Christmas as a part of their Sing-A-Long Series on Monday, October 21st at 7 pm. Guests are invited to sing along with everyone’s favorite Halloween character and Pumpkin King, Jack Skellington, and his crew of terrifying fiends, as Jack tries to re-create Christmas in Halloween Town.

Attendees are encouraged to dress up as their favorite character and come ready to sing along to Tim Burton’s classic film. Tickets are $8 and are on sale now.

The film follows the misadventures of Jack Skellington, Halloweentown’s beloved pumpkin king, who has become bored with the same annual routine of frightening people in the “real world.” When Jack accidentally stumbles on Christmastown, all bright colors and warm spirits, he gets a new lease on life — he plots to bring Christmas under his control by kidnapping Santa Claus and taking over the role. But Jack soon discovers even the best-laid plans of mice and skeleton men can go seriously awry.

Follow us
Related Topics:charleston music hallmoviesThe Nightmare Before Christmas
Up Next

Charleston-based Photographers to Discuss New Books at the Music Hall